THE JOY OF WRITING BY HAND

In an effort to actually work through the exercises I’ve suggested for other authors, I tried a form of writing I haven’t practiced since I was a little kid and had no choice (read: no typewriter) and that’s writing by hand.

For years—decades actually—I’ve poopooed writing by hand as an affectation (you’re just trying to get it touch with your inner Shakespeare in some kind of dumbass Golden Age Thinking exercise in hipsteristic nonsense) or a waste of time (eventually you have to type it up or no one will be able to publish it, or will even be willing to read it for publication) and though the former may be true for some people, the latter can actually become a valuable part of the writing process.

Maybe it’s just because I’m getting on in years, but my interest in being any version of “hip” or “cool” or “trendy” or whatever variation on that might exist is so small I doubt science has provided us with a unit of measure to describe it. I’m nanohip, picocool . . . I don’t give a rat’s ass.

I use the best technological tools I can get my mitts on to do my job, working almost all the time on a computer. And when I do write by hand, it’s not on archival paper bound in a leather cover embossed with the Celtic cross, nor do I use a gold fountain pen or a goose quill.

I use the cheapest discount spiral notebooks or composition books I can find, purchased the week after school starts for a dramatic discount. Which reminds me, have you bought your writing supplies yet this year? The pens I buy in a plastic tub from Staples, and sometimes I use pens I took from hotel rooms or are other giveaways advertising whatever service—I don’t even know or care. If it works, I’m writing with it.

Fifty pens for twelve bucks! That’s less than a quarter each!

So you have to believe me, I’m not writing by hand so I can feel like a medieval monk or Abraham Lincoln, or whoever, whenever. I focus on the words, not the tools, and if you do that too you’ll find—much to the horror of your accountant, like mine—that writing may be the cheapest business on Earth to enter into and maintain.

So then what about this whole “waste of time” thing and retyping it?

Yes, eventually I have to retype all those words I’ve scrawled (literally—I try to go as fast as I can, not as neat as I can) into my 79¢ spiral notebook with my 24¢ pen. But that’s hardly a waste of time, in fact it’s my first editing pass.

I’m not just typing I’m making decisions about what I wrote—word choice, sentence structure, pacing . . . all that good stuff that takes you from rough draft to first draft. This isn’t just drudge work, or an added step, it’s a necessary part of the writing process.

I’m unbound from the desk again, even though my clunky old laptop has unbound me already. I laid down on my bed yesterday afternoon with my dog Fresno Bob and while he was licking my nose and biting my thumbs I wrote a solid thousand words of a short story. 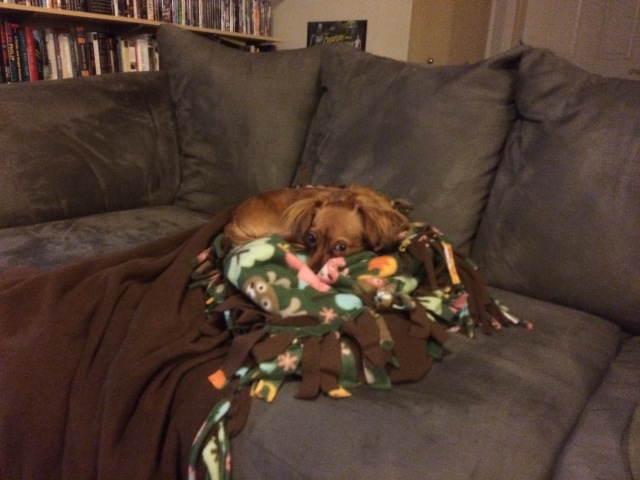 Yes, I named my dog Fresno Bob, because I’m a huge nerd.

I can carry that notebook around with me if I have to. If I lose it, yes that will indeed suck. There’s no cloud backup for a 79¢ spiral notebook, so I have to take basic precautions, but I still mostly write at home anyway, so that’s not a problem.

What I find is that writing by hand somehow frees me up to get into that “flow state.” I sit down with the blank page and for no reason I can explain or that could make any kind of empirical sense, I just find it less . . . scary? Intimidating? More . . . fun? Liberating?

I gotta be honest, I’m not even sure.

But here’s what I do know:

That’s all I need to know.

12 Responses to THE JOY OF WRITING BY HAND