Best-selling author Philip Athans started writing stories the second he became literate. Most of those early illustrated “books” were lost, but a few survived, and one can be experienced here. Moving seamlessly from Star Trek and Lost in Space to Major Matt Mason toys and Big Little Books to science fiction novels like Lester Del Rey’s The Runaway Robot, Phil has always—from his very first memories onward—been a raging all-in science fiction fan. When one of his friends brought a Fantastic Four comic to class in fourth grade, Phil was all in on what’s now called “Bronze Age” Marvel Comics—and that was how he met a certain Cimmerian of ill repute and added fantasy to his list of obsessions. 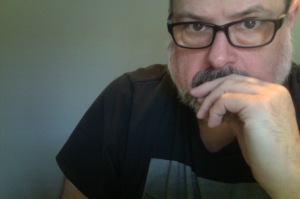 Thanks to Star Wars, a movie that was made specifically for Phil, age twelve, he started to read up on special effects and filmmaking in general and decided he wanted to become the next Steven Spielberg. He made good on that by going to film school where he switched to wanting to be the next Martin Scorsese, but then graduated, moved back to the film industry free zone of suburban Chicago broke, clinically depressed, twenty years old, and rudderless.

That’s when he really started writing, inflicting short stories and poetry on innocent magazine editors all across America, Canada, and the UK. Convinced that the rejection letters he received showed a lack of intelligence and refinement on the part of those editors, not his own, let’s say, “developing” skills as a writer, Phil, inspired by the punk fanzines he’d been reading for a while, started a literary magazine of his own. In its short, five-issue life span, Alternative fiction & poetry, went from complete obscurity to semi-obscurity. Still, there’s never been a better crash course in running a creative business than just diving in and doing it yourself. This is also where Phil realized he had become one of the unintelligent, unrefined editors rejecting the work of many a literary genius. But, concentrating on the positive, he also said “yes” to a whole lot of fantastic authors.

Of course, that magazine lost money—kind of a lot of money for a young, unemployed would be writer—and reality finally closed in. By then he’d met a girl who he wanted to take out on dates, so he got a job in a record store to at least earn a little money, and Af&p ultimately fell by the wayside.

While still selling records he married that girl, had his first of two children, and set out to turn a hobby (role-playing games) into a career. A number of freelance assignments ended up getting him his first paying job in publishing. He sent a proposal for a freelance project (Greyhawk: 2000) to TSR, Inc. and the vice president of the games division (Jim Ward) was so impressed by the proposal and Phil’s resume that he passed it on to the executive editor of the publishing division (Brian Thomsen), who was looking for a new editor. Phil apparently said the right things in an interview he was sure he completely tanked and in September of 1995 he became the newest editor for TSR Books, one of the premiere publishers of fantasy fiction in the world.

His editing job moved to Seattle two years later when TSR merged with Wizards of the Coast, and Phil moved with it, finding a new home and a string of successes in the Pacific Northwest.

The best thing about that job was the intense, hands-on development of complex intellectual properties that went way beyond traditional genre publishing. His passion and skills in that regard are exemplified in the great leaps forward that the Forgotten Realms novel line made under his care. Phil worked with established authors like R.A. Salvatore (whose FR novels, The Two Swords and The Pirate King, broke the top five on the New York Times hardcover fiction best sellers list), but he also had the enviable opportunity of discovering new talent and starting some outstanding young authors on successful careers. Though he wrote his first novel in 1985, he published his first, the successful-in-sales-only computer game novelization Baldur’s Gate, in 1998 and has gone on to publish a bunch more since.

Thanks to the success of the Pokémon trading card game (which Phil had nothing to do with) and the bonuses it spat forth, he had a second child in 2000, because now he could actually afford it.

When Wizards of the Coast became part of Hasbro (also thanks to the success of the Pokémon trading card game), Phil stayed on for another ten years or so, rising up the ranks from editor to senior managing editor. Then the entire global economy almost slipped off a ledge into oblivion, a new edition of D&D tanked, book retail lost Borders and a lot more, and the company decided they didn’t want to pay Phil anymore, or really publish any books anymore, so off he went into the wild blue yonder, and by “wild blue yonder” I mean the impossibly cruel economic wasteland of 2010.

Things got a bit iffy there for a few months, but who says there’s no second acts in American life? Unhireably old, Phil went into business for himself, and after a couple of bad ideas and blind alleys finally settled Athans & Associates Creative Consulting into a busy, successful freelance editing, ghostwriting, and consulting business.

And he’s only just realized that he’ coming up on twenty-six years of actually making a full time living reading fantasy, science fiction, and horror novels and working closely with their authors.