THIS IS NOT A REVIEW OF SYFY’S CHILDHOOD’S END

May contain spoilers, read at your own risk.

And you should know by now that I don’t write reviews. I sometimes write recommendations of books or movies or use books or movies as positive or negative examples, but never reviews. Ever.

I watched the first part of Syfy’s mini-series adaptation of the Arthur C. Clarke classic Childhood’s End this morning (thank you, DVR) and I liked it, but who cares what I like? What struck me most about it, really, wasn’t so much whether it worked either on its own merits as a movie, or how closely it held to the Clarke novel, but what it, and a few other recent movie and TV series and mini-series represent, that prompts this post. 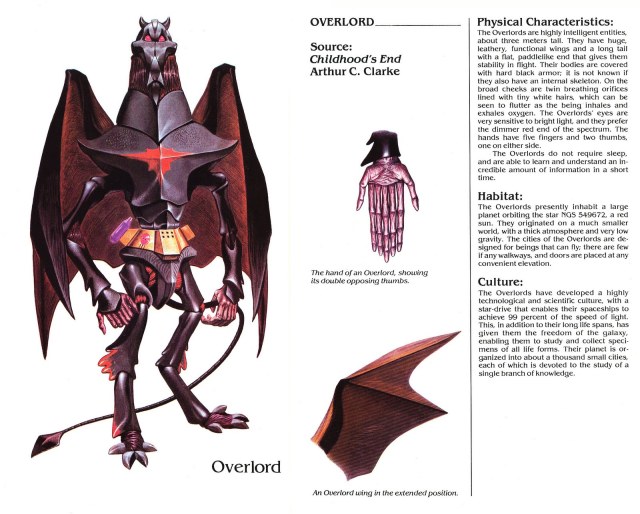 Still, let’s get those two things out of the way. So far at least I think it stands as a fine movie, though we’ve only seen the first third. It’s always nice to see Colm “Chief O’Brien” Meaney, the story hung together nicely, and the effects were good, but then at the end of part one we were treated to that vital first look at the Overlords. Though I read the novel before I got a copy of Barlowe’s Guide to Extraterrestrials—which I still have and is one of my most loved books—I don’t think my mind is capable of accepting the Overlords as looking any different than the way Wayne Douglas Barlowe imagined them. Syfy chose to go much more literal, with something lots more like Tim Curry in Legend—or what I guess you can call “full Devil.” I get it, I guess, but it was a little disappointing.

As for how closely it stuck to the novel: it certainly has in spirit, but honestly, I read the book so long ago I can’t remember enough specifics to be either delighted or horrified by any of what must be several divergences from the source material. In fact, though I’d read a bunch of Arthur C. Clarke’s novels and short stories before this, I took the one-semester science fiction course my high school offered and this was the book we read as a class. I liked it, but thought it was kinda “sci-fi light,” which made sense if you’re trying to get non-SF people to read SF? Anyway, I’m pretty sure that was my junior year, so I read Childhood’s End in late 1980, early 1981? That was thirty-five years ago.

Pause while Phil allows how old he is to sink in, gasps for air, and shudders.

Anyway, the Syfy adaptation is set in our present day, and the novel was originally published in 1953. Surely that very significant sixty-two years at least will have forced some changes. I’m okay with that.

But here’s what I think is really exciting: They’re finally making movies based on the great science fiction and fantasy canon.

There have been film adaptations of science fiction novels going all the way back to the beginning of cinema, of course, with Georges Méliès’s A Trip to the Moon (1902) clearly inspired by the H.G. Wells novel The First Men in the Moon, which was published just a year earlier. And Fritz Lang’s seminal Metropolis (1927) was an adaptation of a novel written by his wife, Thea von Harbou.

But still, most of the science fiction novel adaptations have been a little, shall we say “iffy” in terms of quality, with a few high-quality outliers like Jurassic Park proving the rule established by movies like Sphere, also adapted from a Michael Crichton novel or earlier examples like Donovan’s Brain (based on the novel by Curt Siodmak) or They Came from Beyond Space (based on Joseph Millard’s The Gods Hate Kansas). Anyway . . . there are actually a lot of terrific movies based on SF and fantasy novels, but still I want more, and in this new golden age of TV, fueled by the success of Game of Thrones, we’ve got some interesting stuff happening now, either going back to some of the classics, like Childhood’s End, or newer works like The Expanse, based on the novel series by James S.A. Corey and of course the Shannara series based on the Terry Brooks classics.

Some of these, like Game of Thrones and (based on the first episode) The Expanse will definitely be worth watching and being a big old goobery fan of, and some will be misses, like the Earthsea adaptation that was . . . unworthy of mention, and some, like Childhood’s End, will fall somewhere in-between.

And now more than ever, as we work on our own novels, we’ll all start getting that bug, hoping the powers that be will find our books and bring them to life. And though I’ll never be more than guardedly optimistic where Hollywood is concerned, with so many channels and streaming services clamoring for content and digital effects getting simultaneously better and cheaper, it does seem more possible now than ever to see our work adapted for the screen. And what’s great about what’s possible with visual effects now is we don’t have to dial down our books—limit the number of giant starships, slavering alien monsters, or world-transforming magic rituals. We can keep writing big, and watch as Hollywood catches up to imaginations like Arthur C. Clarke’s that ranged free way before Stanley Kubrick took the first, now clunky and dated-looking stab at “good science fiction.”