TIMES NEW ROMAN 12, THE ONLY FONT YOU’LL EVER NEED

Times New Roman was created by Stanley Morrison, a type designer, and Victor Lardent, a draftsman, in 1932 for the prestigious Times of London, which had the font “tested by the highest ophthalmic authority” after following the recommendations of the British Medical Research Council’s Report on the Legibility of Print. They were so proud of their new typeface they printed a side by side comparison with its previous font, and objectively it is more readable: 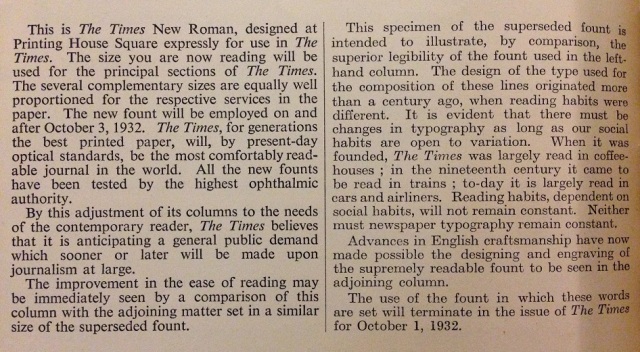 Even though the Times itself thought Times New Roman was specifically a newspaper font and shouldn’t be used in books, the overall readability of it took it quickly into the book publishing world as well. And once the computer screen and printers moved past the era of sans serif for screen-readability’s sake, Times New Roman made its home there as well—at least until Microsoft made the incomprehensible decision to default to Calibri, which may be the least readable and least portable typeface I’ve ever come across, with the obvious exception of the truly decorative fonts.

Since at least the late 90s, I’ve screamed at the top of my lungs from whatever rooftop I’ve managed to climb up on that the only font any author needs or should ever use is 12-point Times New Roman. And I stand behind that. It’s the most readable typeface on a screen or printed. The overwhelming majority of guidelines from publishers and agents who demand any particular font at all will ask for Times New Roman, with a few weird old Courier holdouts, who want to pretend we all still use typewriters.

But we don’t still use typewriters.

And for all you sans serif fans who damage the eyes of your innocent victims with huge blocks of Arial, I beg you to stop it. Arial is a decorative font that might be appropriate for headlines in some cases, other design uses, I don’t know… but Rachel Hawley does and breaks it down in “Here’s the Typography of the Next Decade”:

At the beginning of the 2010s, geometric sans serifs—those without serifs or contrast in stroke width, and whose letters are built around simple shapes like circles and squares—experienced a dramatic uptick in popularity within web and digital design. As the geometric sans serifs rose to prominence, elements such as drop shadows, gradients, background textures, and bevels began to fall away, leaving behind the flat, minimalist digital aesthetic you might see on Facebook, Airbnb, or Postmates. Many designers cited a desire for increased legibility on low-resolution screens as reason for the shift; the desire for increased page-load speeds likely also played a role.

Now, please read this carefully: I’m saying that when you send your writing to someone else, it’s all 12-point Times New Roman all the time. But while you’re writing…?

[author Sean] Richardson, whose exploration of what it means to be queer and religious, Unorthodox, was published last year, admits he is a “Calibri 11 person” himself, although “if I’m writing creatively I’m a Garamond 11.”

The bestselling novelist Max Porter also eschews serifs. “Grim and uneventful reply I’m afraid. Stone cold auto Calibri 11,” says Porter, author of Grief Is the Thing With Feathers. “But with postcards of great lettering and design and art and landscapes on my wall to periodically cleanse my eyes and soul. I don’t know why I live this way.”

Write in whatever font and whatever you size pleases you, inspires you, makes you laugh or cry… It’s all good.

Until you send it out.

Of course, whoever you send a .doc (or .docx… the subject of a future rant, I assure you) file to may very well select all and change everything about your carefully crafted standard manuscript format. Old people like me have trouble reading 12-point type at 100%. I just zoom in to 200% and get rolling since I’ve had a contemporary “letterbox” screen, but back in the old TV aspect ratio days I would pull the margins way in and boost the type up to, like, 18-point, write and edit like that then pull the margins back out to standard and the type back to 12-point when need be.

So, God help your eyes, go right ahead and write a 100,000 word novel in 10-point Arial or 9-point Comic Sans… whatever floats your boat. But once you want to float the boat of a publishing professional, set aside your comfort for theirs and show that you are at least that professional.

Or, which I would actually recommend if you haven’t decided on some kind of “lucky font” or something, reset your defaults to 12-point Times New Roman (like I do) and never, ever look back. Now you’re free to put all the creativity you might have put into your manuscript design into the story itself, which will always, always be more important.

And a final note for indie publishers: Various ebook outlets may have made font decisions for you. There’s no reason to do battle with that. Let them figure out what works best with their devices, etc. If you’re setting up a print book, Times New Roman is fine, but now you can get a little smaller, but even if you really want to save pages, anything small than 9-point is going to be hard to read. I’d even go so far as to say 10-point is as small as you want to go. But for your print books, Times New Roman is not the only font. I like Bell MT—it has great readability and an attractive italic. Forgotten Realms novels were set in New Century Schoolbook—a great font for longer blocks of text. And there are others, but Calibri? Arial? No. Just… no.

There, I said it.

2 Responses to TIMES NEW ROMAN 12, THE ONLY FONT YOU’LL EVER NEED