Just a couple weeks ago I said again that writers should always be reading, that we can learn more from reading the work of others than we can in most courses or books on writing. This is true—if we’re actively reading.

I love a good book. I even love mediocre books if they’re at least fun and in some way surprising. And, of course, those definitions “good” and “mediocre” are entirely my own. Sometimes, when I’m reading for pleasure, I do let myself fall into the story. This really is why we read fiction. But still, it can be difficult to turn off the editor’s eye, and maybe harder still to turn off the writing teacher’s eye. So when I’m reading there’s always a corner of my brain asking, “Should I write this down?” or “I wish I’d seen this before I wrote that post on pacing an action scene!” and so on. I’m always on the lookout for lessons, examples of what works and doesn’t. This is the sort of “active reading” we should be doing, at least some of the time. It wouldn’t hurt to go into reading any novel thinking: What can I learn from this?

But what does that kind of reading actually look like?

As an exercise, I went to a shelf right next to my desk and pulled out three novels more or less at random. I have not read any of these yet—they’re just sitting there waiting—so I can’t and won’t try to make us all suffer through some detailed breakdown of everything these authors did wrong or did right. But just to show exactly how much we can get out of someone else’s published work, I’m going to flip through them and see what floats to the surface…

Here’s how to write the first paragraph of a thriller:

They found out about him in July and stayed angry all the way through August. They tried to kill him in September. It was way too soon. They weren’t ready. The attempt was a failure. It could have been a disaster, but it was actually a miracle. Because nobody noticed.

Lesson learned in starting in media res (in the middle of things). Here is someone who is in big trouble. We have no idea yet who he is and whether or not he deserves to be killed (if anyone deserves to be killed). Is this a group of bad guys trying to kill a good guy, or a group of good guys trying to kill a bad guy? What are they so angry about? Who is “he”? Now, the cover does identify the author and reads: A JACK REACHER NOVEL across the bottom, so we can probably start making some guesses from that. But anyway, who are “they”? There is a character in here, whether or not he’s Jack Reacher. This is not “It was a dark and stormy night.” This is clearly a story about people trying to kill a person. Even in this one little paragraph, the story has started and there are people with at least the emotion of anger in conflict with another person. And that’s what a story is: characters in conflict. Okay, I would have pushed back on italicizing the last sentence—that felt a little too much for me—but see? I’ve now written 215 words of thoughts and questions and one complaint about a fifty-word opening paragraph.

A western—cool! I haven’t read a western in ages, and haven’t read many all together. I’m going to open up to random page…

“Yeeoow!” Wiley yelled and jumped sideways. His foot hit the loose rocks and he cartwheeled down the steep slope to our left, into a thick patch of cactus some fifteen feet below.

With his anguished wail in my ears, I caught a movement on the ledge where he had been standing. A sunning rattlesnake was uncoiling and beginning to slide away out of sight around the slab.

I took one last, quick look toward the spot where the snake disappeared, and then began a careful descent of the slope.

“Anything busted?” I yelled. 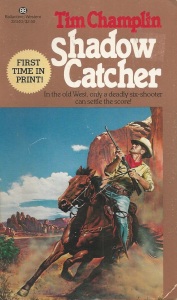 Well, this is fun! Here’s a mix of dialog and action from which we can pull a lot of valuable writing lessons. First of all, I have a general beef with stuff like “Yeeoow!” I should write a separate post about that. For me, at least, and I don’t feel I’m alone in this, spelling out the sound of someone screaming, laughing, etc. just comes off as goofy. And not just sometimes, because you want to be goofy (and there’s nothing wrong with wanting to be goofy) but really all the time, even when you’re not trying to be goofy. In this case I’m a bit on the fence, because the author may well have been trying to be goofy. Maybe?

Wiley yelled. He jumped sideways and his foot hit the loose rocks. He cartwheeled down the steep slope to our left, into a thick patch of cactus some fifteen feet below.

With his anguished wail in my ears, I caught a movement on the ledge where he had been standing. A sunning rattlesnake was uncoiling and beginning to slide away out of sight around the slab.

But maybe instead of this poor rattlesnake verbing all over himself:

A rattlesnake uncoiled and started to slide away out of sight around the slab.

One issue here, and that’s the word “toward.” Follow the link:

I took one last, quick look toward the spot where the snake disappeared, and then began a careful descent of the slope.

Then it ends strong!

“Anything busted?” I yelled.

I like that the author, having established there were only two people there, leaves off the dialog attribution where it isn’t necessary. I had no trouble following who was speaking which line of dialog. You might get a little push back with the non-standard “came the cry,” but I like it. Dialog attribution does not only have to be he said, she asked. You can cry (as in to yell) a line of dialog. You see “he cried” all the time. Why not a little extra pizzazz?

So, a mixed bag there, but lessons learned!

I’ve collected up the complete Berserker series having read the first one as a kid. I really liked it back then, but have yet to plunge into the rest of the series. 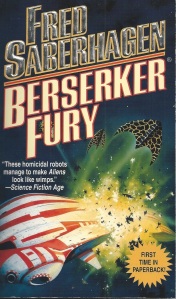 What struck me about this book, just flipping through it, wasn’t the writing but the typography. Here, indie author/publishers please take note. Novels are, mostly, page after page of text. On first blush it can seem as though little or no thought really goes into that. Of course, that’s not true. I’ve written a bit in the past about at least some basic typography stuff, but before you set your book up for a print edition, find a bunch of recent books from major publishers and examine them closely. Unfortunately, though, if you chose Berserker Fury for that reason you’ll be treated to an example of what not to do.

Scene breaks signal to your readers a change in POV and/or place and/or time. In a manuscript to be read by agents and editors, three asterisks on an otherwise empty line will suffice—and they’ll suffice in a printed book, too, though there’s actually all sorts of creative leeway there. In Berserker Fury the strange choice of leaving an empty line then starting with a big bold, sans serif initial cap simply did not work for me. This is especially true since Mr. Saberhagen seems fond of the scene break. This just looks weird to me. It’s distracting, pulling me out of the text to instead puzzle at the design.