Posted on September 1, 2020 by Philip Athans

Austrian physicist Erwin Schrödinger’s 1935 thought experiment meant to describe the quantum physics concept of superpositioning posits that if you put a cat in a box with some poison and close the lid, the cat has both eaten the poison and died, or ignored the poison and lived, until you open the box. Only at the point when the cat is observed, is the cat fixed into one of the two positions, alive or dead. Here’s a fun TED animation that explains the concept in more detail:

Leaving aside that Schrödinger himself walked away from the idea later in life, let’s extend that concept to writing and posit that every story idea is both good and bad until you let it out of the box.

I’ve posted before about having some version of an “idea file.” Write down and save stray ideas and look back at them from time to time—but look back at them in their current superpositioned state. If all it is is an idea, that idea is by nature “a blur of probability.” It’s in a superpositioned state between good and bad, and will require an observer (you) to examine it, which is to say at least start writing it, in order to fix it in a specific instance of good or bad. This might be a novel way of thinking about it, but I’m far from the first person to say that an idea by itself is of no value until you do something about it. In Never Say You Can’t Survive, Charlie Jane Anders wrote:

So how can you tell if a story idea is worth your valuable time and attention? By trying to make it work and seeing what happens. There’s no diagnostic that works as well as just trying to do the thing, and seeing if it’ll happen—and being okay with deciding at some point that it’s not happening with this particular premise.

I bet you can tell if an idea has eaten the poison before you get all the way through a full rough draft, but honestly, that might not be the case. You might actually struggle all the way through it, thinking—as I’ve recommended myself—that it only has to be a short, bad book, and it will be made whole in the revision process… but then the revision process turns into a death march of painful realization that this idea was crap to begin with. It doesn’t happen often, but it does happen. It sucks, but learn from it and move on.

Most of the time, happily, you’ll encounter the dead cat fairly quickly. I know some of you reading this are committed “pantsers” who abhor the very idea of an outline, but this is where at least a basic plot outline can really come in handy. I’ve had “brilliant” ideas that didn’t survive the outline stage, and even dragged my poor Fantasy Author’s Handbook readers through one of them—a space opera book that never solidified for me, that never found its legs, and was never actually written.

Unlike a dead cat, story ideas can be brought back to life in some cases. So you find after making a couple attempts at an outline that the idea hits some impenetrable wall. It doesn’t make sense, there’s kind of a sort of plot or plot-like thing but no characters or there are characters who you want to get to a great idea for an ending but there’s no apparent way to get them to that ending because you have no idea where they’re starting from or why they’re going that direction… a million, a billion variations on “it’s not working.” Let it sit. Maybe, and maybe entirely out of the blue, a flash of inspiration will pop into your head that suddenly makes the whole thing make sense, and the cat struggles to life.

Fiction is our way of exploring the landscape of the imaginary, why not look at the process as an imaginary cat in an imaginary box with imaginary poison who either stays dead or is brought back to imaginary life by what might actually be a real miracle? 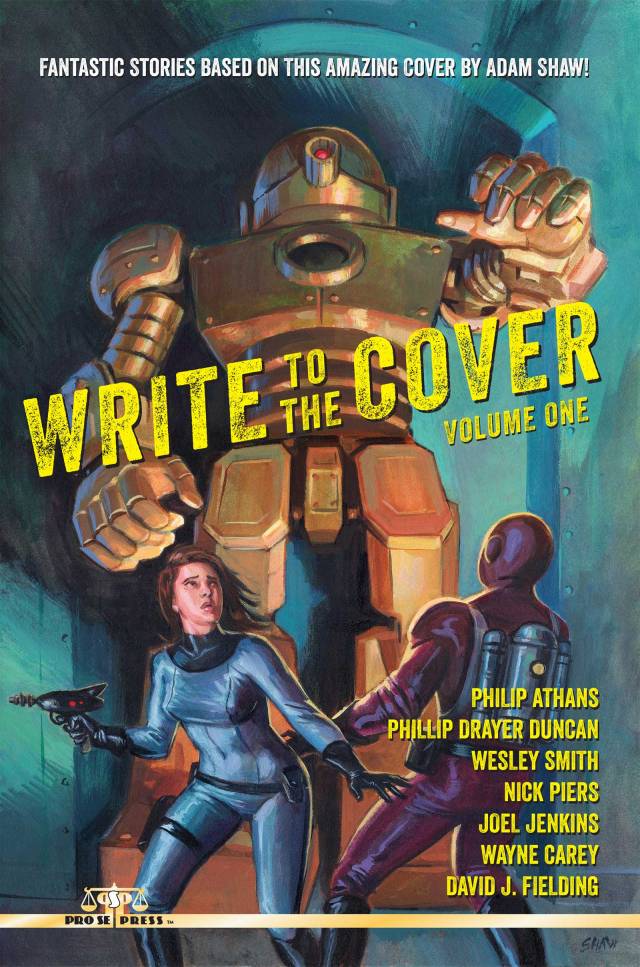 Bella Lucky’s (so far) only appearance in print.