TELL ME YOU HAVE SOME OF THESE

I have file after file on my computer of story ideas, the beginnings of stories, notes for stories and novels… Please tell me you’re doing this too. Please tell me you aren’t letting story ideas just pass you by. I might not ever actually write any of these, but here are a few, just for fun, and just to show that sometimes an idea can come to you kinda sorta semi-formed, and maybe an idea is only:

“In the depths of labyrinthine caves, embedded in gigantic rocks, buried in the hottest geothermal vents, and in the cold stellar dust of space, life is stealthily creeping.”

And that’s all I’ve got: a sub-genre and a quote from a book I read.

This one is in a file called AsylumStoryStart.doc:

The /name of/ Asylum for the Mentally Ill tumbled down the hill like a man-made avalanche. It came apart and rolled together in a jumble of crumbled bricks and pulverized mortar, shattered glass and corroded steel, jagged ceramic and shredded fabric. Steel bed frames, rust settling into the scratches in the grey paint, twisted together like skeletons, great dead rib cages, femurs, /bone/, and /bone/, but no skulls. Mattresses, stained golden brown with blood, vomit, and urine, slid down intact, some trailing heavy leather restraints. All this collected into a pile at the bottom of the hill, the weight of it pushing the wrought iron gate to a precipitous angle. In the driving rain, it settled with no dust, no cloud of smoke. Of the hundred and sixty-seven patients and thirty-eight staff, there was no sign, and there never would be.

/fix that last bit since you showed us their bones./

Okay, I don’t know the names of very many bones right off the top of my head. I’ll do research later!

Ah, this one has a title:

guy teleports to work, comes out 1,000,000 years later—meets people dropped there from the last few years

before accident: reports of cover-up, people being lost in transit

after about 10,000 people are lost, teleporters were banned, world economy collapses into war, which is why, a million years later, the Delayed are the only people left on earth

I wrote down the date this idea came to me because that will be important for my biographers in centuries to come, I’m sure.

Some seem like a great idea then a few minutes later I start thinking maybe it suffers from a lack of originality. I find it difficult to believe I’m the first to come up with this one:

based on the biblical Book of Matthew

hears screaming in the night

local (bored, depressed) priest: “the demoniac—leave him in peace.”

against local priest’s cautions, cleric goes to cave in mountains over looking town

who laugh and fly off to town

madman dies—“they were keeping me alive, I was keeping them contained”

maybe the townspeople call the madman “the jailer”

Well, who doesn’t love the occasional WILD FUCKED UP EXORCISM? And make sure you have that super awesome surprise ending in all caps. That seals the idea forever in eternity. 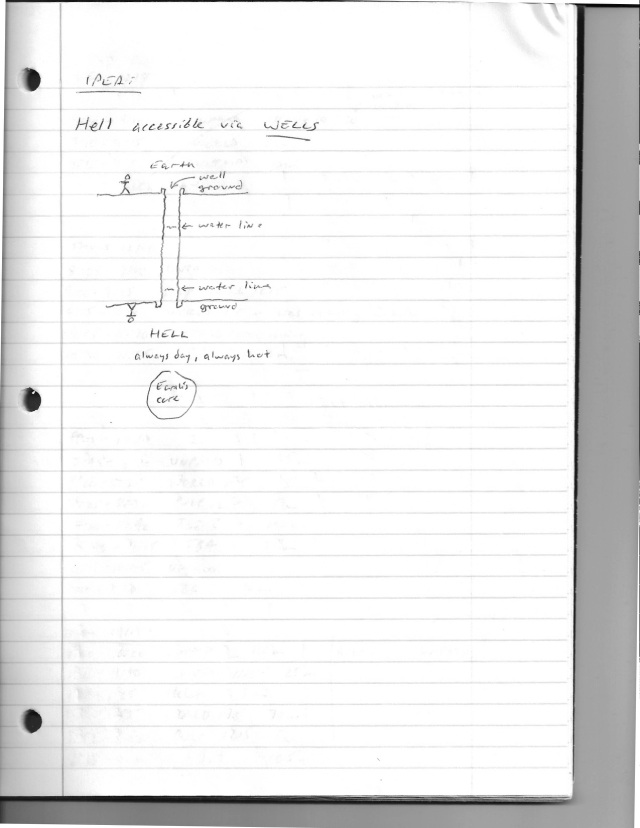 Surely there’s a way to combine that with the WILD FUCKED UP EXORCISM of the previous idea. And, yes, I did save this scan as HellsWells.pdf—don’t judge me!

This one also has a title—and I like it!—but the story is… ouch…

A special ed teacher becomes convinced that the kids in her class are aliens—or angels, or demons—but what we’re really experiencing is her descent into madness after a lifetime of undiagnosed psychological problems and abuse.

There might actually be a way to write that. It would make a great Netflix series.

Tom Connelly paused in the act of dismembering Salvatore “Big Sally” Pizzanato with a hacksaw to take a tentative sip through the little hole in the white plastic top of his venti Americano.

I have posted the entire contents of a Word file, or the one page from a notebook I scanned, for each of these ideas. You’re seeing literally everything I have on each one. And that only gets me to the beginnings of the Ms in an alphabetical list of files, and there are more… lots more… in notebooks that I haven’t scanned or copied yet. This is a writer’s brain: one idea after another after another, and only some chosen few become stories and not all of those stories are worth sending out in the end. But I’m going to keep doing this. On my deathbed the coroner will find a scrap of paper clutched in my hand upon which is scrawled:

A group of “militants” take over a federal building ala Oregon “standoff.”

Eventually the authorities are called away on other stuff—everyone forgets they’re there—but the militants don’t ever realize this so their “siege” goes on for a thousand years, across many generations in what becomes a bunker society based on fear, and which has come around 180 degrees from their original dogma.

Until a young couple escapes and realizes just how far the world has progressed around them—they’re like monkeys in a world of supermen.

Oh, that one is gold!

If you manage to get from idea to first draft, look to Athans & Associates Creative Consulting for story/line/developmental editing at 3¢ per word.

Now scheduling projects for late February and into March.

5 Responses to TELL ME YOU HAVE SOME OF THESE