From time to time I’ll recommend—not review, mind you, but recommend, and yes, there is a difference—books that I think fantasy (and science fiction and horror and all other) authors should have on their shelves. Some may be new and still in print, some may be difficult to find, but all will be, at least in my humble opinion, essential texts for any author, so worth looking for.

As has been the case with many of my favorite books, I came across In the Dust of This Planet: Horror of Philosophy, Volume 1, by Eugene Thacker entirely by accident while browsing in one of my favorite bookstores. I was a little unsure of it at first—can’t say I was ever a particular fan of reading philosophy, per se. I blame my impenetrable college freshman textbook for beating that urge out of me. But freshman year of college was, for me, a rather long time ago now and I had actually begun teaching a course on horror writing by then… so the book looked, actually, right up my alley. Would there be some added wisdom within that I could pass on to my students? Would it give me a wider perspective on the genre? Would it just be… interesting?

It proved to be all of those things and more. Enough so that I then bought the second and third volumes, and read them in what is for me fairly rapid succession.

Each of the three volumes: In the Dust of This Planet, Starry Speculative Corpse, and Tentacles Longer Than Night, are slim little books—the longest is the third at only 204 pages—but all three are densely packed with ideas that weave together the Western philosophical tradition and genre horror in fascinating ways.

The first two books focus on philosophy, essentially using horror as a lens through which to examine the work of a handful of major philosophers. The third is much more tied to the horror genre, examining the interesting ways in which genre horror expresses similar, if not identical ideas, how it presents a philosophy of its own, and how it challenges some long held philosophical beliefs. Though the third volume may sound more of use to horror authors, I would recommend reading all three, and reading them in order.

And I would further recommend reading them with a smartphone or computer nearby, and a pen in one hand. I made extensive notes in all three of my copies, highlighting whole passages, underlining books, articles, and other sources mentioned so I could find them elsewhere—and a computer to translate some “lingo” that will be unfamiliar to anyone who hasn’t studied philosophy, or (like me) hasn’t studied philosophy recently.

By way of random examples, here are a few things I made note of in In the Dust of This Planet:

Let us consider a hagiography of life in the relation between theology and horror: the living dead, the undead, the demon, and the phantasm. In each case, there is an exemplary figure, an allegorical mode, a mode of manifestation, and a metaphysical principle that is the link between philosophy and horror.

A long-standing foundation of Western philosophical thought, the principle of sufficient reason states simply that everything that exists has a reason for existing. It is the very bedrock, the very ground of philosophy.

…I wrote: “And yet it’s not at all true—another example of human arrogance.” This is a book that invites that sort of critical read—at least, it invited me! Later, I wrote “interesting concept for competing magic systems” next to:

…the via negativa or path of negation as the way to divine union. Those in this tradition often utilize several modes of discourse to talk about the divine: that of negative theology, in which one makes use of language, logic, and philosophical argumentation to demonstrate the aporetic unknowability of the divine, and that of darkness mysticism, in which poetry and allegory are used to suggest the ways in which the divine remains forever beyond the pale of human thought and comprehension.

In Starry Speculative Corpse  this quote from Dionysus the Areopagite:

“The fact is that the more we take flight upward, the more our words are confined to the ideas we are capable of forming; so that now as we plunge into that darkness which is beyond intellect, we shall find ourselves not simply running short of words but actually speechless and unknowing.”

…inspired me to ask: “True of cosmology, quantum physics, etc., too, yes?” And then I just like this quote:

In the depths of labyrinthine caves, embedded in gigantic rocks, buried in the hottest geothermal vents, and in the cold stellar dust of space, life is stealthily creeping.

Some of my marginalia was as long as the thought on which they commented, as when I wrote “And it turns out THIS ISTHE CASE—so it may render all—or most—philosophy not only moot but another example of human arrogance” in response to:

What if there is no reason for the world’s existence, either as phenomena or as noumena? What if the world-in-itself is not ordered, let alone ordered “for us”?

Call me a rationalist, but the world is clearly  not “ordered ‘for us,’ ” The question “Which came first, the planet or the humans that inhabit it,” has been answered unequivocally. Earth is comfortable for us because it was here first, and we evolved on it. Case closed. Our “special place in the universe” is the chemical nursery that birthed us. This is not a mystery. 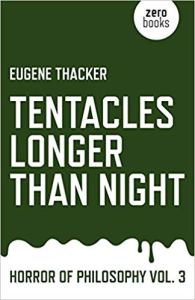 Then in Tentacles Longer Than Night, this passage made me think of my own blog post “The Persistence of the Logical” in so much as “I’m crazy” can make more sense than believing the “impossible”:

And yet, what is more terrifying [than] insanity is the possibility that “it” really happened. This is a crucial twist in both Poe’s and Lovecraft’s stories—what is horrific in not that one is insane, but that one is not insane. At least if one is insane, the strange, terrifying “it” can be explained in terms of madness, delirium, melancholia, or in terms of clinical psychopathology.

Is this a definition of the “weird tale”? Fear of fear itself?

In so far as stories like these are part of the horror genre, they present horror less as a stimulus-response system, in which a threat elicits an emotional response of fear, and more as a kind of freezing of all affect, resulting in a combined state of dread and fascination—what theologian Rudolf Otto once called the mysterium tremendum. In stories like these, horror is a state of frozen thought, reason’s dark cyclopean winter.

Along the same lines, a quote from Thomas Ligotti’s The Conspiracy Against the Human Race (which is now on my Amazon list):

“In the literature of supernatural horror, a familiar storyline is that of a character who encounters a paradox in the flesh, so to speak, and must face down or collapse in horror before this ontological perversion—something which should not be, yet is.”

And this is far from the only book I’ve added to that list from my reading of the three books of Horror of Philosophy. I have a feeling you’ll have a list of your own when (not if!) you read them, too. 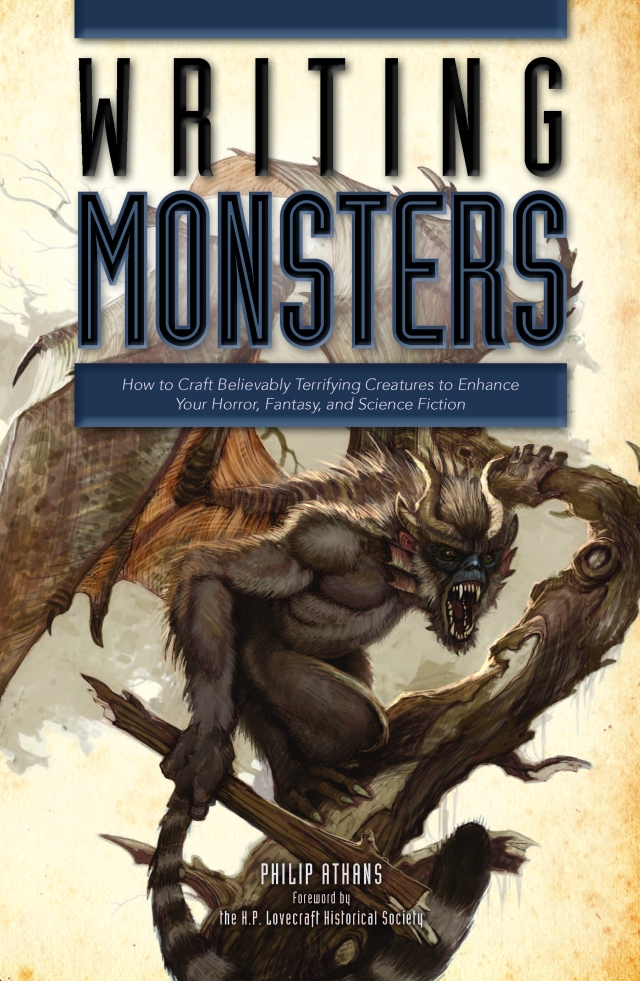