Our next story from the January 1925 issue of Weird Tales is “A Changeling Soul” by Victor Lauriston—another name that didn’t ring a bell for me. I find it fascinating how this issue of Weird Tales features such a range of authors, from popular and prolific names in the pulp magazines of the era, to authors who are still read and valued today, and authors who dropped in out of nowhere then dropped back out to nowhere having written very few short stories, at least very few genre stories. It shows that there must have been some sort of “slush pile” that editor Farnsworth Wright drew from, that lesser known or at least not-yet established authors were able to submit stories—and get them published.

I found some details of the life of Canadian author Victor Lauriston (1881-1973) thanks to the Canadian Encyclopedia. His real name was William Edward Park, but he legally changed it in 1918. A J.V. McAree Award-winning journalist working mostly in Chatham, Ontario, he published at least two novels: The Twenty-First Burr and Romantic Kent (his most successful). They’re difficult to find, essentially forgotten works, and this story is the only one listed on ISFDB, which means Mr. Lauriston didn’t pursue much of a career in genre fiction. 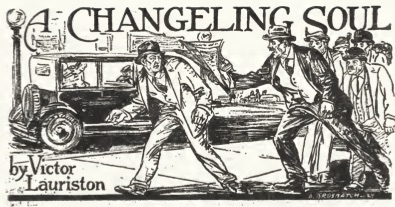 “A Changeling Soul” starts out on a strong emotional note, which I have to admit surprised me since I know going in that the author was a journalist. He’s successfully buried the lede, which is the worst thing a journalist can do but the best thing an author of fiction can do. This shows significant flexibility of thinking on Mr. Lauriston’s part and I applaud that.

We can learn different forms of writing. It is possible to write fiction then flip a switch in your brain and write journalism, flip another switch and write a memoir, another switch to poetry, and so on. In the same way, we can, if we remain flexible in our thinking, switch between genres, too. You do not have to limit yourself to fantasy, much less to some sub-genre within.

Look at that—a lesson learned on page one!

This story also shows that, with all our talk about pulp fiction formulas and the triumph of plot over all else, writing that is often rushed to meet impossible deadlines and padded to squeeze the most money out of a per-word payday, art still manages to struggle through. Maybe Victor Lauriston was secure in his living as a reporter, and clearly he didn’t write short stories for a living, this being (perhaps) his only one, so he allowed himself—and maybe more importantly, editor Wright allowed him—a light, readable, and evocative literary hand.

Don’t forget in your efforts to write entertaining or “saleable” fiction that there’s an art to all fiction as well, regardless of the genre of your choice. I say this because something about the line: About the visitor all things breathed the sensuous beauty of the East. appealed to me in some inexplicable way—and left me with no desire to explain it. It flowed over me. And I love that. That’s mostly why I read in general.

And this, by the way, was a bit of atmosphere that led into the introduction of what might be the single most archetypical of the character archetypes in the pulps of the 20s: an Egyptologist. See? There’s beauty in everything, if you put beauty into everything.

Even, alas, the heavy-handed:

“When I invited you here, my friends,” he said, “I spoke of an important experiment. You are to be the subjects. Be not alarmed—I offer you an honor, not a peril”

How many stories have we read so far in this issue alone that involve someone getting people together for an experiment that either goes terribly wrong or was intended to punish, murder, or otherwise mess with one or more participants? I’m actually afraid to go back and count in case it should reveal it’s been too many, but still, this was 1925. The parlor mystery, the gentleman’s agreement, and so on, like the Egyptologist (good or evil), was what a short story looked like.

This particular experiment goes in search of the soul, likewise not high on the “originality scale,” but I suppose that experiment keeps coming up because it keeps failing.

Mr. Lauriston reveals his journalistic skills when the morning newspaper reveals the murder of John M. Folke, flipping that switch in his head to give us the newspaper account, surrounded by what is an otherwise exceptional example of a tight POV, leading with the emotional responses of the characters. These guys both woke up in an agitated state, grew only more agitated, and are horrified by the news of Folke’s death. We read the newspaper article because they read the newspaper article—it’s not thrown at the reader as a separate bit of explanation, an info dump, but as an essential component to the enfolding action of the story.

This, in other words, is how you use a newspaper article (or TV news report, or letter, etc.) to move your story forward and keep the experience tied tightly to your POV character.

Look at all we learned from a single rather short little pulp story!