So then if science fiction depends to one extent or another on imagined technology, the balancing act is how to keep your story a story, which I like to define as “characters in conflict,” and not a fictional technical paper. The fiction side of the science:fiction ratio demands people doing things in opposition to other people (and feel free to present people as humans, robots, space elves, Martians… whatever) while the science side demands that they do it with science (technology, etc.). Easy.

But then where to draw the line, or where to balance that ratio of science to fiction?

Though she was writing within her comfort zone of “Hard SF,” I was a little pushed back by what felt to me to be an example of what I admittedly too-dismissively call “Hey, look at all this research I did!” in Lois McMaster Bujold’s Falling Free:

Leo smiled thanks for the desired straight line. “They are indeed gas porosities. Oddly enough, though, when we crunch the numbers through, they do not appear to be defects. Let us run the computer scan down its length, with an eye to the digital read-out. As you see,” the numbers flickered at a corner of the display as the cross-section moved dizzyingly, “at no point do more than two porosities appear in a cross-section, and at all points the voids occupy less than five percent of the section. Also, spherical cavities like these are the least damaging of all potential shapes and discontinuities, the least likely to propagate cracks in service. A non-critical defect is called a discontinuity.” Leo paused politely while two dozen heads bent in unison to highlight this pleasingly unambiguous fact on the autotranscription of their light boards, braced between lower hands for a portable recording surface. “When I add that this was in a fairly low-pressure liquid storage tank, and not, for example, in a thruster propulsion chamber with its massively greater stresses, the slipperiness of this definition becomes clearer. For in a thruster the particular degree of defect that shows up here would have been critical.”

Whew. Deep breath. And this is actually paragraph six of a twenty-five paragraph lecture by protagonist Leo that runs more or less exactly like this—exhaustive details on welding quality assurance.

It is fair to keep in mind that Leo has come to this space station to teach welding to a team of genetically engineered “quaddies,” bred to work in zero gravity by some interstellar corporation. This scene shows that the quaddies are smart and attentive, understanding all these technical details and all this technical jargon better than… well, better than I did, anyway. We see that Leo seems to know what he’s talking about (as a casual reader I didn’t, won’t, and wouldn’t ever have fact checked this myself) and is doing what he’s been brought to the station to do, despite his initial surprise and obvious discomfort with what are clearly shown to be genetically engineered slaves. But all that conflict-rich set-up—the story at hand—stops for these exhaustive technical details. Do we (Lois McMaster Bujold’s readers) really need to sit through that lesson? I say no, but I understand some readers may disagree.

Rather than a literal technical lecture, in The Fortress at the End of Time authorJoe M. McDermott shows us his characters’ personal interaction with his imagined future technology: 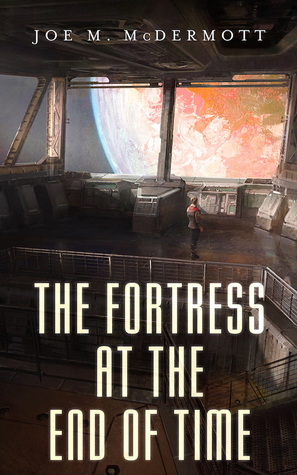 “Ensign,” said the other tech, one of the four women on board, “recording off.”

I nodded, confused. Wong handed me the helmet and the suit. I checked for any signs of damage. We sprayed ourselves with UV blockers, and suited up. We were not in heavy gravity. The airlock door, once opened, would lead to a long tube that ran straight to the central axis upon which we spun. We would fall down into weightlessness and then climb out with ladders to the surface of the station’s outer shell. First, we checked each others’ suits. Never assume a suit is sealed unless it is checked twice by two diligent people. Then plug in the interface, and check the diagnostics for a seal. Recording begins with the computer interface. It can be turned off manually at any time. In cases of imminent death, I am told, it is considered wise to say what needs to be said, then turn it off to protect others from dying screams. There are also situations where communication signals are possibly compromised in wartime, and individual units need to be able to unplug from the network. I did not understand why Wong would want recording off. Even on board the station, while on duty, everything was recorded. We were so accustomed to the microcameras and microphones, we didn’t even see them. Who could bother watching all that footage, anyway, except a machine?

I had to choose between my rigorous training and my new role model’s odd command. Safety protocols trump chain of command. I only pretended to adjust my computer. I consider what I did sinful. Wong had his reasons, and only with the communication recorders off could he even dictate them aloud, but I didn’t think about that in the moment.

There’s actually a lot of technical detail there, and in general I would rather see that sort of detail shown in action, and if that’s not possible then rendered in dialog (as Lois McMaster Bujold did), and only after those first two option are proved impossible, in description. But this description, with some thanks to the first person, feels more personal than the welding lecture. This is a human in a weird and dangerous environment, trying to remember his training, trying to make sure he does the right things even when he realizes that the right things might be based on the wrong reasons. Judgments are being made, the motives of other characters are being questioned—this puts me in that character’s experience rather than pushing me into a chair in a classroom.

From a book about genetically engineered “machines” learning to use traditional mechanical devices through an astronaut balancing safety protocols and the apparent “house rules” of the station he’s been assigned to, Ursula K. LeGuin does what both Bujold and McDermott do when we look at their books in whole. She shows that machines themselves are not the real problem or solution, that “guns don’t kill people, people do.” Or in the case of The Lathe of Heaven, Augmentors don’t change the world via effective dreaming, effective dreamers do:

Orr pulled away the electrodes whose wires ran like thread-worms between Haber’s skull and the Augmentor. He looked at the machine, its cabinets all standing open; it should be destroyed, he thought. But he had no idea how to do it, nor any will to try. Destruction was not his line; and a machine is more blameless, more sinless even than any animal. It has no intentions whatsoever but our own.

Fill your science fiction with science and technology, but not at the cost of characters and story. Technology in science fiction—or magic in fantasy, for that matter—is blameless, it has no intentions but your characters’.

Look to Athans & Associates Creative Consulting for story/line/developmental editing at 3¢ per word.

1 Response to WHEN CHARACTERS MEET TECHNOLOGY