Last week I promised a rundown of the conference I attended this past weekend and here it is! The conference was even better than I’d hoped it would be and I’ll reiterate my “thank you Tweets” to everyone who attended and to Writer’s Digest, who put on a fantastic event. I’ll also reiterate my strong recommendation to everyone reading this who hasn’t been to at least one writer’s conference: Go to one! If you can’t get to LA or New York, find one closer to home. They’re all over the place and the one closest to you is just a Google search away.

So then, my experience last weekend…

I flew in Friday afternoon, knowing (but not liking) that I would miss the full day of sessions on Friday. After a bit of a delay getting off the ground in Seattle, I finally made the short flight down to Bob Hope Airport in Burbank. If you’ve never flown into Burbank, put it on your bucket list. It’s like arriving at a frontier airport in some tiny desert nation. It’s the only airport I’ve ever flown in and out of that has no jetways. Don’t believe me? Here’s a picture of the sheet metal ramp that puts you right on the tarmac!

The shuttle driver actually picked me up at the airport (not so much on the return trip, but that’s another sad tale of woe and want) and I got to the Westin Pasadena in time to get to see most of Robert Crais’s opening keynote. I was a little frazzled from travel—the way travel frazzles, I think, most people—so failed to take any notes, but I liked the guy. He has a very human approach to writing and I think he’d like my Pulp Fiction Workshop. Anyway, he did inspire me to put his books on my to read list—I want to start reading more thrillers, so why not his?

So now I’m in Pasadena, which, honestly, shares many of the things that I really, really don’t like about LA in general, but it had some character to it, unlike “LA in general.” Anyway, I didn’t come for the sightseeing, I came for the conference and was downstairs bright and early Saturday morning determined to soak up a full day of programming. Hour-long sessions were set up in four tracks: Craft & Character; Inspiration & Idea Generation; Genre; and Platform, Business & Beyond. I figured, if I could, I’d try to get to at least one in each track, but mostly I went to what sounded like it would help me most as a writer—precisely the advice I’d give anyone who’s attending one of these. 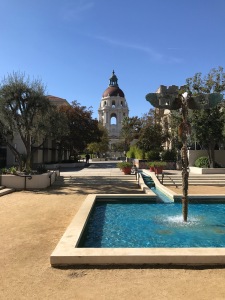 I started my day at 9:00 am with The Secret of Mission-Critical Storytelling with Larry Brooks. His message differed from my own “the villain starts the story, the hero ends it,” to rely more on what the hero wants, focusing on “the hero’s problem.” Though that may make it seem as though we’re somehow diametrically opposed—not so. It’s all about motivation for both hero and villain, protagonist and antagonist. With just an hour he couldn’t cover the whole premise of the book he has coming out on the subject, so he stuck with the idea and his interesting take on the difference between or the combination of idea, concept, and premise that asks, or begins to ask, “What’s the mission of your story?” I took a snap of one of his slides that we’ll call a “teaser” for the forthcoming book, which will be on my own to read shelf. During his talk I scribbled quotes like: “It isn’t a story until something goes wrong,” “Enter a scene at the last possible moment,” and “Do something to your story to make it glow in the dark,” which I just loved.

Next, at 10:15 am, I sat in on April Eberhardt’s The Changing Face of Publishing in which she laid out a fairly bleak picture of the publishing world. I have to admit I cringed more than once at her clearly anti-traditional publishing bias. Yes, it’s slow. Yes, it’s (extremely) hard to break into. Yes, they don’t do as much “marketing” (whatever that actually means) as you want them to. But no, they don’t tie up all rights to your book forever. No, they don’t call back advances for books that don’t earn out—if she advised a client to sign a contract like that… yikes. But yeah—though it can and routinely does take years to get through the mill from first query to published book, it’s still well worth a try. Anyway, she had some good, solid advice on indie and co-op publishing and got some smart, direct questions from an audience eager for help.

Also making it onto my to read list was author Erika Mailman, who talked historical fiction in Delving Into the Past. I’ve been in far orbit around an idea for a historical novel for so long you could write a historical novel about when I first got the idea. This session was a lot of fun, especially the hands-on exercise that forced me to work out a very sketchy bullet point mini-outline for the beginning of that book. It was the first time I ever actually sat down and did that with that idea and a character appeared as if by magic that in all this time thinking about this story never occurred to me, then that character’s relationship to another character… wow! This might be the absolute best reason to go to one of these conferences: It’s an inspiration-rich environment,and you never know what’s going to trigger an idea, another idea, a connection, and so on.

Lunch, then Not Just Your Hero Needs a Plan from TV writer Greta Heinemann, which started out feeling a bit—no, a lot Tony Robbins but she’s hilarious and cool and totally pulled it out with real, human, actionable advice on what she called “productivity hacks” and “accountability hacks” to help reprioritize writing in our otherwise busy lives. She also has a book coming out, the Writer’s Productivity Journal, that could really help you if you’re having trouble getting yourself motivated, keeping yourself motivated, and writing.

Another TV/movie writer (it is LA, after all), Erik Bork, was up next with The Seven Elements of a Viable Story Idea, which was heavily slanted toward Hollywood, including a frankly strange warning against originality that I hope no one in the room took to heart, but there’s still a lot to like in his PROBLEM idea:

Punishing (hero “in hell and under siege”)

Original (“a fresh twist on the familiar”)

Entertaining (and why not?)

Meaningful (theme, which he downplayed)

Sounds like I didn’t like it right? I liked him—the message, on the other hand, may be all you need to know about why studio movies and network TV shows are so awful. I feel bad saying that, but there it is.

Anyway, I was up next with Writing Scary—again: great crowd, smart questions, and I hope people got a lot out of it.

Saturday drew to a close with Curtis Sittenfeld, who I must admit I had never heard of, but I will seek out her work after her charismatic, snarky, but honest talk. She gets more overtly political than I’ll ever get, actually writing from the POV of Hilary Clinton in both an upcoming novel and a short story. She read from the latter and it was amazing.

Sunday was a short day beginning with the closing keynote by the refreshingly forthright and refreshingly nerdy Nicola Yoon, another author I need to start reading, though a huge YA audience has long ago beat me to her. And here’s another reason to come to these: Writers talk to other writers differently than they would talk to an interviewer for a blog, a magazine, or a newspaper (etc.)—and they answer questions about process and the writing life that can be more informative than any staged seminar with a robust PowerPoint.

Speaking of which, I helped close out the conference with my robust PowerPoint for Act of Villainy, which built out from my online tutorial and broke down motivations for villains/antagonists into three layers of motivation. Who knows, maybe you’ll see that covered here in the weeks to come. But what you won’t get here—not in the same way, anyway—is the chance to ask questions and get an immediate answer and then hear the answers to other questions. This is one of the few advantages this old recluse can think of to being out there in real life—the occasional directed, purposeful, but honest and inspiring interaction with like-minded fellow travelers.

Get out there, writers!