ONCE MORE INTO THE PULPS, BEGINNING TO END

I know, you’re sick of me talking about the old pulp magazines, apologizing for their endemic sexism and casual racism, and pointing to this great science fiction author, the other groundbreaking fantasy author, and every significant early twentieth century author of horror, mysteries, thrillers, and romances as having sprung from their pages, but hear me out—the great American pulp magazines really are that great, greater now than they were then, and invaluable lessons can be learned from their pages, their authors, and their legacy.

Just this time without all the women tied up and menaced by absurdly stereotypical non-white “savages.”

In my four-week online Pulp Fiction Workshop, starting up again day after tomorrow, we dig deeper into what the pulp tradition can teach the contemporary author.

Taken from the additional material that comes along with the 6000 word short story you’ll write with Lester Dent’s Pulp Paper Master Fiction Plot in hand, here’s the way to start a story, and a story in any genre, including…

From “Jim Dickinson’s Head” by Harold Ward (Black Mask, August 1920), an immediate establishment of tone, and a broad hint of something terrible having happened:

Jim Dickinson’s head, pickled in a jar of alcohol, reposes in the dishonored fastness of a dusty closet in Doctor Wright’s office.

Of Herbert West, who was my friend in college and in after life, I can speak only with extreme terror.

From the undisputed classic “Weasels Ripped My Flesh” by Mike Kames (Man’s Life, September 1956), a hero in trouble from the get-go:

I was sprawled on a mound of hay—shotgun cradled in my arms and my head drooping fiercely from want of sleep—when that first ripple of alarm surged through the dark house. 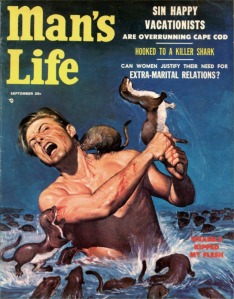 The Wolf flung his axe.

You know Beth Farrell’s story “The Silver Duke” (Love Story, Oct. 20, 1934) is going to get good when it starts off this catty:

Here’s the first line from the much reprinted novella “The Gods Hate Kansas” by Joseph J. Millard (Startling Stories, November 1941), which, again, starts the action right up, and immediately says “this is science fiction!”:

The rocks had been hurtling toward earth for more than a week, silent and invisible in the black airless void of space.

I’m not sure I’d recommend a sentence this long, but look how much worldbuilding Clark Ashton Smith put into the first line of “The Abominations of Yondo” (Overland Monthly, April 1926):

The sand of the desert of Yondo is not as the sand of other deserts; for Yondo lies nearest of all to the world’s rim; and strange winds, blowing from a pit no astronomer may hope to fathom, have sown its ruinous fields with the gray dust of corroding planets, the black ashes of extinguished suns.

For the sake of being complete, how about the first line of “Jinx Run” by Scott Sumner (Wings, Spring 1947):

As an AAF soldier-correspondent I was strictly excess baggage on this mission, and I was mighty glad the little tail gunner had crawled back into the waist to keep me company.

Another great example of naming your hero right up front, while he’s in danger, from “Beast-Gods of Atlantis” by John Peter Drummond (Jungle Stories, Summer 1950):

Without breaking the swift stroke of his paddle, Ki-Gor snatched another brief glance over his shoulder at the pursuing war canoes.

Don’t be afraid to just say what kind of story you’re writing in the first sentence, like Tom O’Neil did in “An Honest Fight Every Night” (Fight Stories, Fall 1949):

Center City was a fight town.

And here’s how you end it, or what Lester Dent called “the snapper, the punch line to end it”:

Well—that paper wasn’t a photograph of any background, after all. What it showed was simply the monstrous being he was painting on that awful canvas. It was the model he was using—and its background was merely the wall of the cellar studio in minute detail. But by God, Eliot, it was a photograph from life!

Carson’s arms tightened about her. “If you’re notorious, then that’s the only kind of girl this mayor wants,” he said, and the ardor and tenderness of his kiss gave her the deep thrill of the happiness she had never expected to know again.

“Islands in the Air” by Lowell Howard Morrow (Air Wonder Stories, July 1929, edited by SF legend Hugo Gernsback, for whom the Hugo Award was named)

Somewhere off in the far reaches of space it still pursues its solitary way.

Winter is coming; we dare not hunt for fear of the animal, and our food is running short.

“The Marshal of Goldfork” by Walter A. Tompkins (Exciting Western, September 1947)

“It ain’t every gun-boss who gets planted in a two-hundred-dollar coffin, eh Malone?”

Behind him Nylabo grinned, white-toothed. He understood. And Bwana Juju would understand. All that really remained to be said was for the maiden’s father to make known how many cows he would take for his golden haired daughter.

The last thing he saw below, rushing up, was the glowing, blistering, white-hot maw of the blast furnace.

I was the only one who carried out orders—and I darned near forgot to pull the ripcord!

The 6000 words in between, well… we’ll get to that, starting Thursday.

3 Responses to ONCE MORE INTO THE PULPS, BEGINNING TO END