PLEASE STOP USING INITIAL CAPS AS A SUBSTITUTE FOR CREATIVITY

Posted on September 5, 2017 by Philip Athans

I know for sure that as a reader of fantasy, and to a slightly lesser degree, science fiction, you have run across a common word with an initial cap used to convey some special emphasis, or just general “specialness,” and used not in place of but as a proper name. Maybe you’ve committed this sin in your own writing.

For me, at least, it’s the end of your unique world, because when you do this, especially when you do this most of the time, and there are some of you—and you know who you are—who do this almost all the time, I stop living in your world and start seeing your writing. Or worse, I start seeing the lack of attention paid to the worldbuilding.

If you can do a match case search for anything on this list and find it in your work in progress, this is your wake up call, your challenge to build just a little bit more world in that particular spot. And this is not at all a complete list:

the Doctor (except for that English guy)

the Kleenex… wait, that one you actually need!

Kleenex is a brand name—always look up brand names and type them the same as you see on that brand’s official web site.

As for the others, and especially with successful examples like the Doctor and the Ranger sort of making me look like a jerk here, I get what you’re going for. This isn’t just a tower, it’s the Tower. But then, if it’s that important to the people who built it, why didn’t they name it? Here’s a picture of a very famous building: 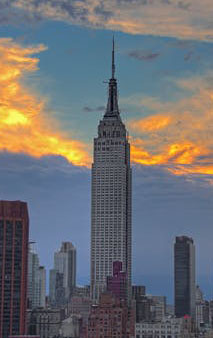 The Building rises up over the City.

Note that it isn’t called the Building.

In pretty much every case, I caution you to fall back on an existing rule of grammar and syntax before you make up one of your own, and only make up a new rule if it really means something to you. So just as military ranks you’ve created, like spearmaster, should follow the same rules as existing military ranks like captain:

“Where is Spearmaster Galen?” Bronwyn asked, having not seen the spearmaster since leaving the Tower for the Breakfast.

“He went fishing with the swordcaptains,” the custodian replied. “You’ll find him down by the Lake.”

So should everything else:

“Where is Spearmaster Galen?” Bronwyn asked, having not seen the spearmaster since leaving the tower for breakfast.

“He went fishing with the swordcaptains,” the custodian replied. “You’ll find him down by the lake.”

But if the tower is a particularly special tower, and there’s more than one lake . . .

“Where is Spearmaster Galen?” Bronwyn asked, having not seen the spearmaster since leaving the Tower of Seven Spears for breakfast.

“He went fishing with the swordcaptains,” the custodian replied. “You’ll find him down by Zargrandis Lake.”

Now these have become proper nouns.

And woe be onto thee who forces an editor to fix every instance of The Council, even if it’s The Council of Twelve, which makes it a particular (proper noun) council.

And just like we name lakes Lake Michigan or even Crystal Lake in the real world, the Lake becomes Zargrandis Lake in my fantasy world.

I just made up the name Zargrandis on the spot, by the way. He was a famous mapmaker who was the first to start coloring in lakes with blue paint, or so I’ve just now decided. I Googled the word Zargrandis because you should do that with every name you just make up in case it means “eat shit and die” in Swahili or something. All I got was an ice cream shop in Surabaya, Indonesia that leaves off the s at the end, so I’m good. They’re on Foursquare.

Let’s face it, a good 90% of fantasy and science fiction worldbuilding comes down to naming stuff.

People name stuff. And okay, not every name is particularly creative. The biggest city in America is named after a much smaller city in England—the Puritans not necessarily known for wild flights of fancy, I guess—especially since it used to be named after a city in the Netherlands before the British colonists got all British and renamed it. But see? There’s a little story behind the name of that city. It’s not just the City.

America is full of hyper literal place names like Death Valley or Boring, Oregon or Volcano, Hawaii. But most of the time we name places after some kind of feeling we want to convey, like the town of Fertile, Iowa, which probably is; or Pyongyang (Peaceful Land), North Korea, which definitely isn’t.

We also like to name places after significant historical figures, like the city of Lafayette, Indiana, named for the French general who fought for the newly-independent Americans in the Revolutionary War; or the state of Washington, where I live, which is named for a character in the popular 1970s sitcom Welcome Back Kotter.

I’d like to live in a town called Malice because I’m a big fan of the Jam, but I live in Sammamish, which is a native Lushoostseed word that, according to Wikipedia, means “meander dwellers, or willow people,” which is just kinda weird. But whatever inspired that, at least it isn’t called the Town or worse, the Suburb.

See where I’m going with this?

How to name places, much less people, is a bigger subject that I don’t want to blow through here, but at least let’s start with not simply hitting a generic word with an initial cap—at least not past the placeholder phase.

Both the Editor and the Reader will appreciate it.