In an effort to actually make some progress on a fantasy novel I’ve way too often and for way too long described as my “work in progress,” I’ve been experimenting with some outlining ideas I’ve never used before.

A lot of writers—sometimes it seems to be every writer but me—plots out stories using note cards. These used to be and sometimes still are actual physical note cards. In more and more cases they’re virtual note cards, which a lot of the various writing software packages provide. Still gun shy from my attempt to use at least one of those software packages, I went ahead and bought some old fashioned physical 3”x5” note cards then decided to get all fancy and bought a set of colored Sharpies, too, so I could color code stuff in service to my little dollop of OCD.

Weapons in hand, I pulled out my trusty composition book full of more or less random notes on characters, plot points, and assorted pieces of worldbuilding and started thinking about how to actually use those note cards.

Heaven forbid I Google it or anything and maybe find people that might have some good advice on how to best use these cards. Instead I went ahead and “developed” my very own “system.”

For what it’s worth, I’ve always loved creating “systems” for stuff. Getting myself to consistently use those systems . . . that’s another thing.

Anyway, I thought maybe we can go along on this quest together: The Quest for How to Use Note Cards to Outline a Novel.

Looking through my composition books, my notes seemed to easily break down into four categories:

You have to start with characters—I do, anyway—and I wanted to try to use these cards to map out certain points I wanted my characters to hit, all of these, by the way, starting in very broad strokes.

Plot Points are just that: events in the story. I had several of these in mind, some thought through in some detail, others just very top-level. 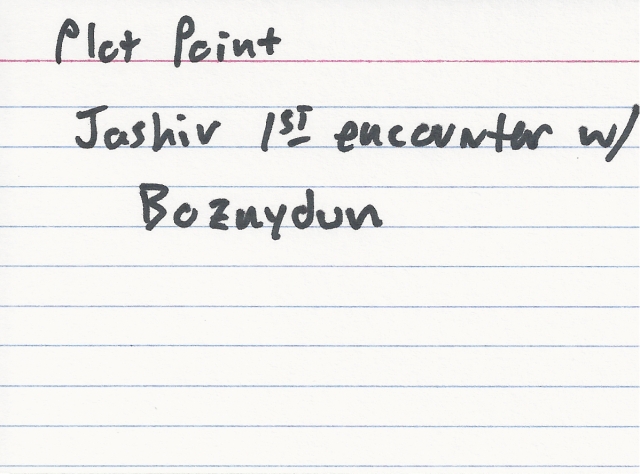 I have most of the character names already figured out…until I get a better idea, that is.

But as I started getting into it and writing cards I was having trouble divorcing the characters from the plot. After a couple failed attempts I realized:

Don’t separate characters from the plot!

After all, these should never be exclusive elements anyway, right? The plot of a novel is, essentially, all the stuff the characters in the novel actually do. For whatever reason, though, I kept calling these “plot points,” so now I have a bunch of Plot Point cards that really talk about what characters are doing, experiencing, etc. And that’s fine. 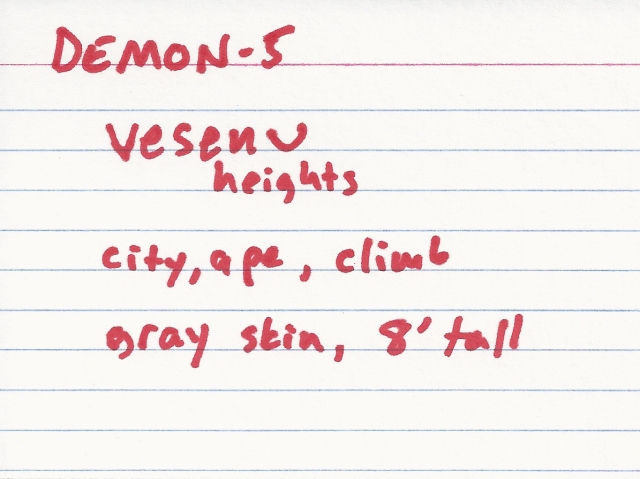 Yep, this is my whole “one demon per ten most popular phobias” idea!

The story is about a world overrun by demons and maybe the most thought-through bit so far is a hierarchy of demons that range in relative power. I made a card for each of these types of demon—again, very sketchy, very top-level, knowing that I will work with them and flesh them out from these broad strokes. 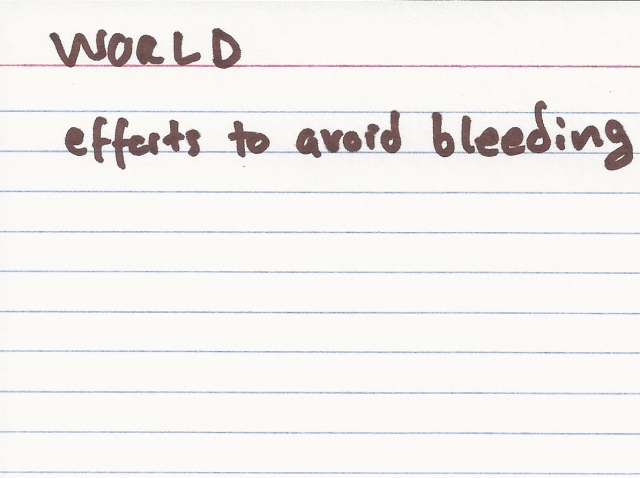 Demons are attracted to the smell of blood…

Then the worldbuilding category includes important aspects of the setting I’m pretty sure I’m going to need to introduce to inform the characters and story. My hero starts off as a simple farmer, who knows a bit more about the world around him—is a bit more “worldly”—than the average peasant, but not much. He will experience the bigger world for the first time along with the readers.

Then I sat down and started writing on the cards—quickly realizing that I needed a new category:

I want this story to include a straight-line path from one part of the world to a distant point, with stops along the way that also increase the danger to my hero. He starts at home, in the (relatively) safest place in the world, going farther and farther from his comfort zone on his way to the most dangerous place in the world. 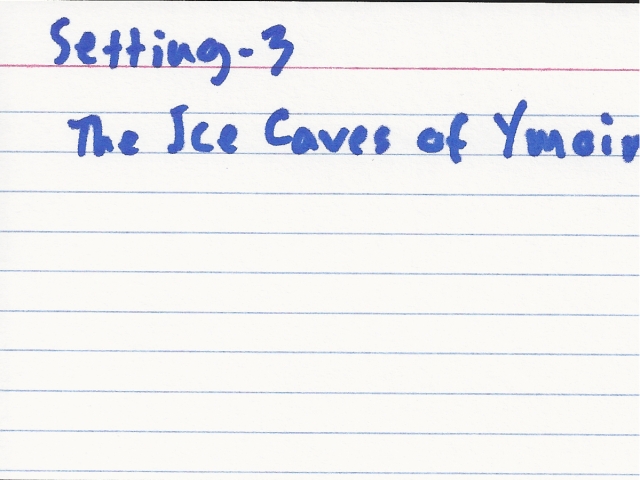 This one kinda got cut off in the scan. It says: The Ice Caves of Ymoin.

That last bit could describe just abut any fantasy story, couldn’t it?

And that’s the thing—at least in this first step—I kept everything very simple: the least amount of text necessary not to really properly outline the whole book, but just to set up signposts to remind me that I need to think about this, I need to get this character from here to there, and to remind me of certain significant moments in the character’s arc, etc., from an almost formulaic standpoint. For instance, I have cards that just say “Jashiv is injured,” then with varying degrees to remind me that I need this guy to suffer along the way. What the nature of these “injuries” are and even if they’re physical or emotional or psychological . . . all that’s to come. I just have cards to remind me to beat him up.

One of the things that surprised me along the way was that as I went I started to realize that the number nine was significant.

I have nine different types of demons.

I have nine separate settings.

So really what I had was a Rule of Threes.

Then my closet numerologist burst from hiding and mapped out the whole thing as three parts, each consisting of three sets of three chapters each, corresponding to the nine demons/nine settings and mapping to the three act structure and . . .

Okay, getting ahead of myself. But I like this kind of stuff. It starts to make sense to me now. The book is taking a sort of physical shape inside my head.

What I need to remind myself of as I go will be that this three sets of three sets of three thing is a starting point, a jumping-off point, and I absolutely cannot allow the slavish adherence to that structure to force me to write a pointless chapter, keep a boring character, jam in a useless scene, etc.

Likewise, that structure can’t force me to keep out a great new idea—a new scene, a new character, a new angle on something.

I’ll check back in here as I go and add some more details, and work through some things that seemed to work, and some that didn’t, all the while hoping to keep this relatively spoiler free. After all, eventually I’m going to want you to buy this book!

And I might even go out and see if someone else has some note card outlining wisdom to share, too.