A few weeks ago I described the step-by-step process of creating a random SF/fantasy paperback grab-bag. At the end of that process, I chose the first random book and came out with The City and the Stars by Arthur C. Clarke. Though the idea behind the whole grab-bag thing was to read more, and read for fun more, my brain just won’t allow me to read a book “just because,” and I ended up making a few notes in the margins and calling out a few examples of some interesting things on the subject of writing science fiction, SF worldbuilding, and so on. Let’s take a look at what SF Grandmaster Arthur C. Clarke can teach us from this very early book in a very long and distinguished career. 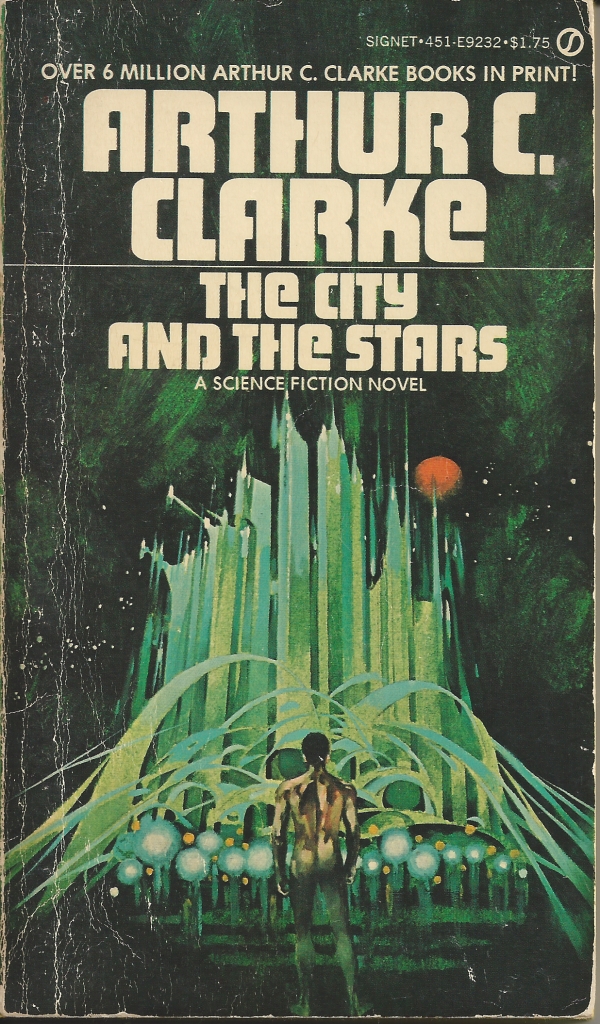 This is a scan of the actual copy of the book I own.

Against the Fall of Night was begun in 1937 and, after four or five drafts, was completed in 1946, though for various reasons beyond the author’s control book publication was delayed until some years later. Although this work was well received, it had most of the defects of a first novel, and my initial dissatisfaction with it increased steadily over the years. Moreover, the progress of science during the two decades since the story was first conceived made many of the original ideas naive, and opened up vistas and possibilities quite unimagined when the book was originally planned. In particular, certain developments in information theory suggested revolutions in the human way of life even more profound than those which atomic energy is already introducing, and I wished to incorporate these into the book I had attempted, but so far failed, to write.

And this to begin a novel in which he describes virtual reality role-playing games, computer viruses, and other advances in information technology.

I’ll say again up front that the goal of science fiction really isn’t to attempt any sort of accurate prediction of the future, but that doesn’t mean it doesn’t sometimes happen. It has been noted before, too, as in this article at the Smithsonian web site, that science fiction has actually inspired advances in technology, when engineers read about some groovy gadget then set about trying to actually make it happen.

Good luck with that.

Working our way through The Guide to Writing Fantasy and Science Fiction, we’ll start with Storytelling. 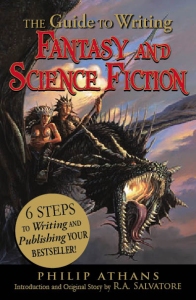 Taking it “step by step.”

Clarke begins with an idea, or really a question, I think: “What might the world/humanity be like millions of years into the future?”

As for theme, the book left me wondering what Clarke was trying to say. He seems to waffle back and forth between: “technology will cause us to stagnate and grow complacent and ignorant” and “technology will save us from all ills.” I guess we can put it somewhere in the middle: “Technology is great but we should still keep exploring—there’s always something knew to discover.” I can get behind that.

And that’s ultimately what’s most important, not what the now-deceased author was trying to say or meant to say, but how each individual reader interprets the work left behind. This was Arthur C. Clarke’s book at first but once I bought a copy, on at least a philosophical level, it became mine, and the creative act of reading it infused the experience with all my own ideas, baggage, etc.—for good or ill.

The City and the Stars begins in the city of Diaspar, which is the last and greatest city on Earth, believed to be the final home of the sum total of the human race. At some point in the very distant past, humans had colonized the galaxy, but were driven back to Earth after an unsuccessful war with an alien enemy. The decision was made by those humans to cut themselves off from the galaxy in general and live lives of quiet contentment in a single technological utopia that offered, among other things, immortality.

Its into this techno-paradise that Alvin is born. He’s unusual in that he was naturally born rather than having been resurrected from the city’s DNA records. Normally, people from Diaspar, after reaching the age of some thousands or even millions of years, choose to go back into the gene pool, temporarily “dying” only to be reborn in some distant future to enjoy another immensely long life. But Alvin is here for the first time and as such has some peculiar ideas, not the least peculiar is his curiosity about the world outside the city, which he’s always been told was a lifeless global desert.

He finds his way out of the city and to the neighboring nation of Lys, another pocket of human civilization, this one having gone the psychic route. The people of Lys know about Diaspar but Diaspar doesn’t know about Lys. While in Lys, Alvin discovers a strange alien robot, then the strange alien who controls it, and this sets him off on a quest to discover the truth about why his people were driven back to Earth and their vast space colonies abandoned. He eventually, with the robot’s help, finds an ancient starship, which the robot operates for him, and goes off to explore the cosmos only to find that there was no terrible enemy, that the human race more or less just gave up and went back to Earth to live in this vacant state of self-absorption, tended to by the Central Computer and its robots, in a self-maintaining city that caters to their every need.

The writing itself is fine, but suffers a bit from the author being English (which used when that should have been, weirdly archaic style choices like the initial cap in Man) and this just having been written sixty years ago or so. There’s some muddiness to the POV, some odd word choice, etc., and even some typos that are likely artifacts of Signet’s fast-and-cheap repackaging of the original Harcourt edition.

For all that, let’s go ahead and stipulate that Arthur C. Clarke was a good writer.

As for characters, truth be told there is only a bit of meat on the bones there, but even then, Clarke does a generally good job of conveying “the weird” (which is to say, anything the characters find unexpected—some of the bigger SF concepts) through an emotional connection, through that character’s reactions, like in this example, when Alvin has found his way to the hidden/abandoned subway that connects Diaspar with long-forgotten Lys, and puts himself at its automated mercy:

When the door closed behind him, Alvin slumped into the nearest seat. All strength seemed suddenly to have been drained from his legs: at last he knew, as he had never known before, that fear of the unknown that haunted all his fellow men. He felt himself trembling in every limb, and his sight became misty and uncertain. Could he have escaped from this speeding machine he would willingly have done so, even at the price of abandoning all his dreams.

It was not fear alone that overwhelmed him, but the sense of unutterable loneliness. All that he knew and loved was in Diaspar; even if he was going into no danger, he might never see his world again. He knew, as no man had known for ages, what it meant to leave one’s home forever. In this moment of desolation, it seemed to him of no importance whether the path he was following led to peril or to safety; all that mattered to him now was that it led away from home.

This shortens the emotional distance between Alvin and the reader . . . bravo, Mr. Clarke.

Next week we’ll take a deeper dive into the art, people, and monsters—the worldbuilding—of The City and the Stars.