Okay, you just have to go to conventions. Unless you really live in the remotest of areas there is one nearby at least once a year, and if you’re willing to drive or even fly a few hundred miles there might be a dozen or more. I live in the Seattle area, which is one of America’s great Geek Pockets—more nerds per square mile here than punk rockers and aging hippies, no matter what MTV (in 1992) says. But that doesn’t mean I have to limit myself to Seattle conventions, does it?

Of course not, especially when there are some good ones within driving distance. So after contacting the fine folks at Wizard World and arranging a seminar, I bundled the family into the busted down old minivan and headed south on I5 to Portland, Oregon, where the young go to retire.

Oh, and everything you’ve heard about Portland is true, including every second of the IFC documentary series Portlandia.

So it’s got that going for it.

Especially for the drive down, and scarily well-timed, I bought the new Decemberists CD “What a Terrible World, What a Beautiful World” for full Portland immersion. And it’s awesome.

I’m not even going to pause to let you know that comic book (or game or anime, etc.) conventions can be great family trips. Bring the kids . . . there really is something for everybody. Mine have been to cons before and were old hands.

The drive down was rainy and bleak (it was the last week in January in the Pacific Northwest, after all) but was brightened up by a stop on the way at Country Cousin wherein I ate more meat in one sitting than I’ve eaten in months, and it was ridiculously good. Shout out to my Country Cousins!

After arriving in Portland we headed for the convention center, which as convention centers go is really nice. I remember it from Wordstock 2009. My seminar wasn’t until 5:30 and though the drive down took a little longer than expected (but Country Cousin was worth it!) and the line at registration was long, we had some time to wander the convention floor before the seminar and ran into this guy, in from the Red Planet.

And yes, I am wearing my official “I Died During Character Generation” Traveller t-shirt!

Costumes have gotten insane since my first convention, in 1981, in which there were no costumes at all.

If you’ve never been, conventions are like giant flea markets but only for geeks. You can buy comic book back issues (my son and I drooled over a copy of Amazing Spiderman #1 but couldn’t pony up the $1950.00 to buy it), games, toys, swords and other weapons (brass knuckles that said MADE IN PAKISTAN really gave me the creeps), costumes and props, t-shirts, original art, and anything else you’ve ever heard of that might have a picture of a superhero on it, or a character from Game of Thrones, or . . .

But with the seminar approaching we decided to save our shopping for Saturday. The seminar, “Writing Fantasy & Science Fiction” went off nicely, though I talked too much and wished I’d left more time for questions. Still, I got some great questions from a smart and attentive crowd and it was especially cool to see a number of kids in the audience, and a couple asked smart questions of their own. These things always renew my faith in humanity. I know that may sound grandiose, but it’s true. There is a whole new generation of smart, creative, passionate people out there and they’re writing fantasy and science fiction.

Already tired we went back to the hotel for dinner and I passed out early, then got up early, and I mean early. I let everyone sleep a little longer but we were still up and out a good two hours before the convention started. This one started late (ish) and finished early (ish) compared to some of the conventions I’ve been to. But it gave us a chance to get a cup of coffee and check out the schedule.

Like a lot of comic book fans my age I remember the old Incredible Hulk TV series with great fondness. Even while wishing it could be better, have better special effects and so on, I was just so delighted that one of Stan Lee’s great characters was finally on TV, and it was actually pretty good by the standards of late-70s TV. I’ve walked past Lou Ferrigno signing at conventions in the past but this time he was doing a whole talk, and in a room right across the hall from the coffee place, and we were an hour and a half early now, so we claimed the first spots in line. And if there’s one consistent rule across all cons its the bigger the convention the bigger the lines. If you want to get into the prime events, come early.

For his part, Lou Ferrigno was fantastic. He really approached the whole thing with a sense of humor that was never condescending and revealed a heart as big as his biceps, and his biceps are still enormous. He probably has fifteen years on me but to look at us together you’d think I was the older of the two—much older.

Is it too late to start bodybuilding? 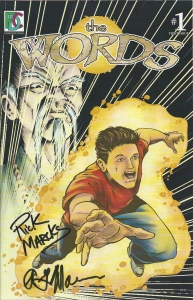 I didn’t spend that much, myself, as conventions go, but one thing I try to do at every convention is seek out some cool indie thing, preferably from a local creator, and buy it. At this one, my wife started talking to someone at a booth and called me over and I got he passionate pitch from comic book writer Richard Mann, who’s got a great idea and that sparkle in his eye that tells me: “Support this guy,” if for only four bucks. So I walked away, smiling, with a copy of The Words #1, signed by Mann and artist Rick Marks of Floating Dock Comics in Portland.

What I was doing while my wife was meeting Richard Mann was looking through a table full of these amazing little paintings, just a few inches tall, that I couldn’t resist. I ended up buying two of them from artist Rochelle Heagh Phister, who is responsible for “The Siren” . . .

. . . by her partner Gomez. The two of them make up Dark’s Art Parlor and you can and must buy their art online.

I went in search of a copy of Essential Marvel Horror, Volume 1, but couldn’t find one (it’s still on my Amazon Wish List) but I did run across a booth selling trades for peanuts and scored a copy of DC Showcase: Aquaman Vol. 2 for only $5, which is less than the used price on Amazon, so that’s cool. And if you’re thinking I might be the only Aquaman fan in the world, maybe I am, but I don’t care. Aquaman rules. Respect the Aquaman. And yes, I already had Vol. 1 at home. 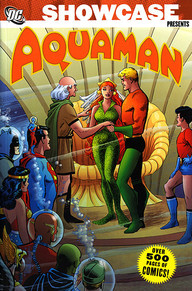 And last but not least, when I heard someone call out, “Up to 5XL at no extra cost!” I had to stop, because I’m a big guy and can’t always find t-shirts I like in my size. The kind folks at JBM Press sold me a shirt that reads: tsundoku, which is the Japanese word for: “The act of leaving a book unread after buying it, typically piled up together with such other unread books.”

I am one of this country’s topmost tsundoku masters.

With everybody feeling tired and a long drive back home, we bailed out on Portland Comic Con with smiles on our faces. For about thirty hours we took Portland by storm.

We did everything but put a bird on it.