Moving forward from last week’s post in which I sort of de-emphasized the overwhelming importance of books and reading, let’s circle back to books, and in particular, what books I got for Christmas.

For what it’s worth, I’m not a Christian myself, but I’m under a certain amount of pressure from my family to at least go through the motions of Christmas, which means I’m not always so gently forced to give and receive presents. Let’s set aside my own peculiar pathology when it comes to a reluctance to receive gifts (or praise, etc.) and let the rest of this be positive.

Anyone who knows me knows that it’s always a good default to, should the occasion demand, give me books as gifts. Books tend to be the only thing I ask for, and so yeah . . . I get some books for Christmas, birthdays, etc., and because I’m fifty years old and don’t believe in Santa Claus I pretty much end up buying my own Christmas presents anyway, which I think is much less weird than any of you who are reading this who think that’s weird might think.

My daughter tells me she first realized there was no Santa Claus when she recognized my handwriting on a gift tag, and when my kids first realized that I had also written “To Phil from Santa,” it further demystified the holiday for everyone.

Can I go ahead and claim that as a Black Ops mission in the War on Christmas?

Anyway, in some combination of buying this for myself and wrapping it up under the guise of a gift from someone else or as the result of an Amazon gift card, here are the books I got for Christmas and a little bit about why . . .

Let’s get this one out of the way first so we can all move on.

The Haunted Vagina by Carlton Mellick III . . . It’s impossible to be near the internet and not to have heard of this book, which as far as I can tell is the Lord of the Rings of the “Bizarro” genre. I haven’t read it yet, so I can’t tell you if I like it, if it’s any good, if it’s as perverted as it’s billed as, and so on, but on first blush (oh, and we all do indeed blush!) this is a comedy horror story. I bought it and will read it out of curiosity around the whole bizarro thing. I’ll neither defend nor condemn it without reading it. That’s what smart people do.

A space for another deep breath. 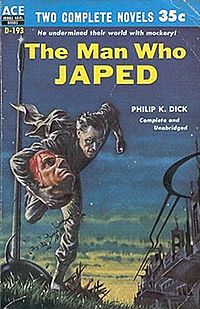 Of course I needed to add to my still incomplete collection of Ace Doubles and I’ve been concentrating on the D series, which are the first run of Ace Doubles from the 1950s. This year I spent a little extra on myself and picked up one of the rare Philip K. Dick Ace Doubles. The Man Who Japed is billed as “Complete and Unabridged,” which is nice, and features the weird cover art that made Ace Books in general so awesome. This one is backed with The Space-Born by the great E.C. Tubb. It has found a proud place in my collection.

I also ordered the Ace Double Space Station #1 by Frank Belknap Long and Empire of the Atom by A.E. Van Vogt, but unfortunately the seller sent me the single-edition of just Space Station #1, which is plenty cool for any fan of vintage SF, but I wanted the Ace Double for my Ace Double collection! It was a pretty understandable mistake and the seller has been super cool about it, so we’ll say no harm no foul on that.

A few months ago I happened upon the Star Trek Fotonovels at a used bookstore and immediately bought all they had, but they didn’t have all of them, so now I have to collect all the rest of them. And I mean, I have to, so for this Christmas I got the first of them, which happens to be the Harlan Ellison classic City of the Edge of Forever. If you haven’t seen the old Fotonovels, you need to go find one. They did these for all sorts of movies and TV shows. I bought the Grease and Saturday Night Fever Fotonovels for my wife. What they did was take stills from the movie or TV show and lay them out comic book style with dialog balloons. They’re hilarious, awesome, and just chock full o’ nerdy wonderfulness.

Speaking of Star Trek, I still have my Star Trek James Blish novelization boxed set that has Star Trek 1-8 but somehow, somewhere along the line I lost the other four books that weren’t included in the box so I thought I was filling that in by ordering Star Trek 10, Star Trek 11, and Star Trek 12 but somehow forgetting Star Trek 9. This is not a happy thing for OCD collector nerds like me, but we’ll get that sorted out soon enough. For those not familiar with these, they’re slim little books that present a handful of the original series episodes as short stories written by James Blish. It took them twelve volumes to get through all three seasons, and they’re Star Trek anything, therefore are must-haves.

Years ago, when we were still dating, I ran across two books in my wife’s family’s house that I had never seen before and they were the most awesome things I’d ever seen. They were collections of old Star Trek comic books reprinted by Golden Books. When they saw how much I was enamored of them they gave me the books and I’ve had them ever since. Turns out there were four of them and they gave me the second and third. I later found the fourth one and this year filled that missing gap in my Star Trek shrine with the first one. Some weird storytelling and goofy art, but just all Star Trek, all the time, so . . . yea!

I’m actually listening to comedian Marc Maron’s podcast WTF while writing this—have been listening to it like mad lately. I like his TV show, too, so why wouldn’t I buy his book, Attempting Normal? It’s near the top of my to-read shelf. If you haven’t been indoctrinated into Marc Maron fandom, what the hell are you waiting for? He’s smart, funny, open . . . and WTF is the best podcast out there, full stop.

And then last but not least comes the gorgeous American Grotesque: The Life and Art of William Mortensen. This is another internet discovery for me. I’d never heard of this brilliant artist, who was shooting these amazing “special effects” photographs in the 1920s. What I saw online absolutely blew me away and I just had to get this book, and not just for the photographs but for the text that gets into Mortensen’s life and process. You know I’m a sucker for deep looks inside the creative process in any form. And that’s the reason I like Marc Maron so much, too, by the way. His WTF interviews get deeper into the creative process than any interviewer I’ve ever heard. And I know, you’re probably just thinking I’m a big gross creep with The Haunted Vagina, but I want to dip into the bizarro world for the same sort of reason: What is this weird creative thing and what’s it all about?

Okay, so three books we can file under “interest in the creative process,” two books (one and a half really) that fill in the coveted Ace Doubles collection, and five Star Trek books because I’m a frickin’ Trekkie.

Merry Christmas (or whatever) to me!

4 Responses to BOOKS FOR CHRISTMAS