Also known as a copyright page, every book has one . . . or anyway, every book better damn well have one.

Take any book off your shelf, a library or book store shelf, and there it’ll be, almost always immediately following the title page.

Not all of them look exactly the same—in fact, there’s quite a variety to this otherwise ubiquitous dumping ground for . . . for what, exactly?

Though you will see a variety of approaches, there are a few common denominators to the legal page, and it’s a good idea that every author, professional or aspiring, have a working knowledge of what all this means and why it’s there.

We’ll look at an example, which I’ve taken from my most recent book, Writing Monsters. It’s got some stuff you see on every legal page, a few things you sometimes but not always see, and a few things you almost never see. Here it is: 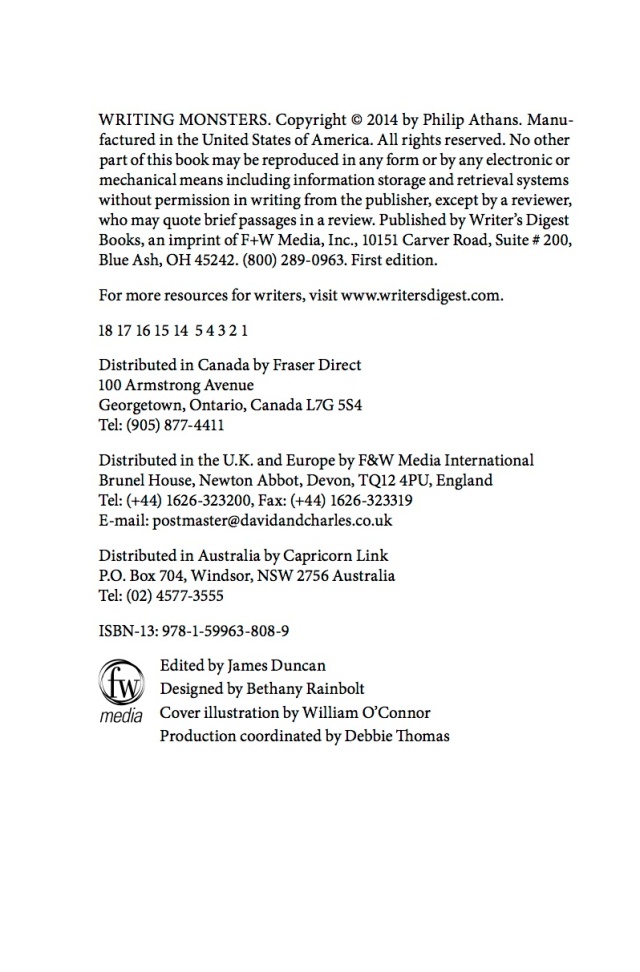 Let’s start at the top and work our way down.

You almost always see the title of the book at the very top, and this in no exception, with the title (sans subtitle) starting us out: WRITING MONSTERS.

Next is the copyright statement, which in this case includes both the word copyright spelled out and the copyright symbol ©, though either one of those alone will suffice, followed by the year of the book’s release (2014) and my name. This identifies me as the copyright holder for the complete work . . . mostly, anyway. Throughout the book are footnotes and other citations that show where I used an example from another author’s work, etc. I also make no claim whatsoever on the cover illustration. It’s safe to assume that this copyright statement covers the text itself. If at any point in the future, Writer’s Digest Books takes this book out of print and the publication rights revert back to me, and I want to find a new publisher for it, the cover art and design, and interior typesetting and design, will not come along for the ride. Just the text.

I’m not entirely sure why “Manufactured in the United States of America.” immediately follows that, with “All rights reserved.” coming after, but okay. Anyway, this says that I have all rights to this text. I wrote it. It’s mine.

You will find some version of the following in just about every book:

No other part of this book may be reproduced in any form or by any electronic or mechanical means including information storage and retrieval systems without permission in writing from the publisher, except by a reviewer, who may quote brief passages in a review.

Frankly, I’m not sure how necessary this is since the applicable copyright law tends to say the same thing, but in some ways I think this might be one of those “keep the honest man honest” things. Rather than allow someone to innocently blunder into a copyright infringement, which then sends everyone into the Hell of Lawyers, let’s just say, “Hey, you can’t just copy this.” And for anyone who pulls e-books off illegal torrent sites, this means you. I’m not a millionaire Robber Baron. I use royalty income to feed and clothe my children, so please don’t steal from me thinking it’s a victimless crime.

Another very, very common element to the legal page is the identification of the publisher of the book. In this case it’s: “Writer’s Digest Books, an imprint of F+W Media, Inc.” And you’ll almost always see an address. It’s a bit unusual that they include their phone number, but they did. Please don’t call there looking for me. I’ve never been to Blue Ash, Ohio, though I’m sure it’s very nice.

The publishing business of full of imprints, which in some cases operate almost as separate companies-within-the-company in bigger publishing houses, and sometimes exist simply as a way to group like titles together: books in the same genre (SF/fantasy, mystery, etc.), similar categories of non-fiction (computers, business, etc.), and so on. F+W Media publishes all sorts of things, including some science fiction and fantasy I helped curate for them as part of their Prologue imprint, but most of their books on the art and craft of writing, like this one, fall under the Writer’s Digest Books imprint. SF and fantasy readers will recognize imprints like Del Rey, which is part of the Random House family of imprints; or Tor, which is part of Macmillan.

And yes, it is the twenty-first century, so the publisher has included a web address. Good luck finding a book published in the last twenty years or so that doesn’t have that.

The next line has that mysterious string numbers that I’m sure you’ve seen but very few people actually understand. This is called the print key and it tells you which printing this book came from. Print keys tends to be shown as a string of numbers counting backward, usually from nine: 9 8 7 6 5 4 3 2 1. The lowest number in that string is the current printing, so in this example you’ve got a copy from the very first batch that was printed. If the lowest number was, say, 6, then your copy came from the sixth printing. There’s usually a minimum press run of 5000 copies for offset printed books (as opposed to print-on-demand that will happily make one at a time), but the first printing of a book could be many thousands . . . tens of thousands, even hundreds of thousands for a book the publisher feels confident will be a best-seller.

You might see some pretty big numbers in a print key, and that’ll tell you that a book is particularly successful and has been for a long time. I’ve seen books in their 40th printing or more. Still, since most books published in a given year sell fewer than a thousand copies, most likely, you’ll see a 1 at the end of that print key.

In this example, the publisher has also included the year of the printing. This isn’t in any way required, but lets you know that the first printing occurred in 2014.

The reason for this string was that back in the old days when books were literally typeset: block type placed in physical trays (galleys) and mechanically pressed onto paper, it was easy for the printer to simply remove the block with the 1 on it before starting to print the second batch. Now that everything is digital, this remains as one of the publishing world’s little nods to tradition. Frankly, I think a book without a print key would just look weird.

Not very many books will give you the distribution information found here, but as the author of the work in question I personally dig the fact that people in Canada, the U.K., Europe, and Australia can buy this book. I want to be a global brand, don’t you?

Next is the ever-present ISBN, which is identified here as ISBN-13. This used to be a ten-digit number, but now it’s a thirteen-digit number, and basically it’s the book’s Social Security Number: a string of numbers that identifies this specific book from this specific publisher. Again, if this book ends ever up being published by someone else, it will get a new ISBN for that edition. This number is used by just about everybody in the book’s “business life.” Retailers, distributors, libraries, etc., will use the ISBN to order, track, return, and otherwise identify this book. Oh, and ISBN stands for International Standard Book Number.

Another purely optional feature, in this case my editor, James Duncan, was identified by name. This is exceedingly rare, though becoming a bit more common in nonfiction. Other than short story anthologies I don’t think I was ever credited on any of the literally hundreds of books I’ve edited, but there it is. James did a terrific job and deserves credit. Generally speaking, though, editors tend to toil in anonymity.

Book designers and cover artists are much more commonly credited and again, I’m delighted to see that. At TSR and Wizards of the Coast we credited the cartographers, too, when the book included a map.

You almost never see a production coordinator credited, either, but Ms. Thomas has my thanks for all her hard work making this book a reality.

Some things you might also see that F+W decided to omit here:

Library of Congress cataloging-in-publication data: This is basically what a card catalog card for the book should look like. You’ll see this more often in children’s books, text books, and hardcovers. It’s a totally optional element that the publisher has to get from the Library of Congress for a nominal fee. For the record, it does not mean that that book is actually in the permanent collection of the Library of Congress, it’s just a helpful bit of information for librarians in general.

Other permissions: You might also see credits for certain elements of the text that were drawn from other sources. For instance, in the book In Fluid Silence, which I wrote under the pen name G.W. Tirpa, I wanted to use some lyrics from a Woody Guthrie song and my editor secured the permission to do that, and a requirement of that was that we run this text somewhere in the book:

In mass market paperbacks you’ll probably see something like this:

Ever notice that there’s a bar code printed in the inside cover of a mass market paperback? Why would that be?

It’s because bookstores, after whatever length of time, pull books off their shelves, rip the front cover off, return the cover to the publisher or distributor for full credit, and discard the rest of the book. Sometimes those discarded books filter out into the world. If you find one, do everyone a favor and recycle it unread. No one but the print shop got paid for that, ever.

The publisher may have some other numbers—catalog numbers and whatnot—that show up there, and in the interest of space the legal page might also carry the dedication.

Ultimately, what’s really required there is the copyright statement. A lot of the rest of it is a business decision on the part of the publisher.

3 Responses to THE LEGAL PAGE