Logan L. Masterson describes himself as a “poet, writer, actor, storyteller, artist, photographer, and new world man.” Logan and I share a few of those traits, along with a relationship with Pro Se Productions, a leading small press publisher focused on new pulp.

Something I always tell my students is that with hard work, determination, and talent, getting your work out there is not as impossible as it may seem—and now we get a chance to hear from an author at the very beginning of what I’m sure will be a long career. 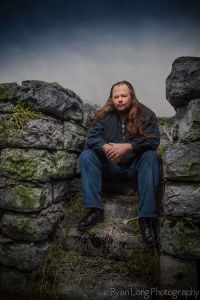 Logan L. Masterson: Fantasy is that fiction which accepts that wonder and magic are key elements in the human narrative. We all believed in magic once.

Logan L. Masterson: Science fiction, on the other hand, frames its wonder within the limits of theoretical possibility, trading magic for rational thought.

Philip Athans: Ravencroft Springsis your first published novella. How did you get in contact with the publisher, Pro Se Productions . . . how did it’s publication come about?

Logan L. Masterson: I was fortunate enough to meet Tommy Hancock and Morgan McKay nee Minor at a local comic book event. It wasn’t quite a convention as such, more of a one-day gathering in a small space here in Nashville. I was totally unprepared, having to bring up my manuscript on my phone, but the Pro Se folks were willing to look at that, and I guess Morgan was pretty impressed, because they offered me a contract on the spot!

Philip Athans: I’ve written a few novellas myself, and found that the e-book format seems to have breathed new life into the novella. Where do you see this trend leading, if it’s a trend at all?

Logan L. Masterson: Oh, you betcha! Of course, some of the major genre awards have had novella & novelette categories for years, so it was never a dead format. Heck, one of the most recognizable pieces of the English Canon—A Christmas Carol by Charles Dickens—is a novella. That said, there is new life in the form, and the e-book is a big part of that. I hope that it will allow a wider audience for these shorter forms. With authors and publishers able to set reasonable prices, it should be an ever more viable format.

Philip Athans: I’ve written a couple short stories for Pro Se and plan to write more. Are you a fan of the pulp tradition, and how do you see it’s place in the contemporary media world?

Logan L. Masterson: I love pulp! Some of my favorite science fiction is the Humanx Commonwealth created by Alan Dean Foster, which is sci-fi adventure pulp at its best! I also love Doc Smith, Harry Steeger’s Spider, Michael Moorcock and H.P. Lovecraft, all of whom have pulp in their veins.

Really, pulp is the equivalent of the modern action movie: it applies innovative language and bombastic characters the same way film pushes the envelope of visual effects. There’s plenty of room for action and excitement that eschews the trappings of self-important literature.

Philip Athans: Ravencroft Springs is billed as “a Lovecraftian tale of suspense” . . . I have to assume you’re a fan of H.P. Lovecraft. When did you first encounter his work and what about his peculiar milieu got your creative juices flowing?

Logan L. Masterson: I guess I first read Lovecraft as a young teen. I must have been thirteen or fourteen when I discovered “The Call of Cthulhu.” I was immediately impressed by the cosmic scale of things, and the bizarre fusion of horror, fantasy, and science fiction. I said to myself, “this is what Poe was reaching for.”

Philip Athans: When you first started writing, where did you go to learn your craft? Did you read books on writing, did you pursue a degree with writing in mind?

Logan L. Masterson: I began by diving in, head first. I had a friend in Dallas who had written something great, and it inspired me tremendously. I wrote a few little somethings, and suddenly felt I had found my calling. I did a lot of poetry in my youth, for the emotional release as much as anything else, and finally turned a serious eye to creating proper fiction much later on, in my thirties. I have no formal education, but I have read a ton of great books on the process and business of writing. I favor Robert McKee’s Story: Substance, Structure, Styale, and the Principles of Screenwriting and Stephen King’s On Writing especially, but I will often check out something new from the library looking for those little gems I have somehow missed elsewhere.

Philip Athans: What have you found to be the most surprising aspect of being a professional, published author—what were you least prepared for when you were still “aspiring”?

Logan L. Masterson: Starvation? Seriously, though, I am most surprised at the welcome I have received from the community of authors. Those writers I meet at events and online are pretty much universally cool people, willing to lend a hand, share their experiences, and help us noobs along the winding uphill road.

Philip Athans: Ravencroft Springs is set in the Tennessee Appalachians. Have you spent much time there? How did you settle on that as a setting for your Lovecraftian horrors? And how important is an author’s direct experience with a real world setting in terms of being able to bring it to life in prose?

Logan L. Masterson: Ravencroft Springs, the town, is based on the real-world artist colony and vacation spot of Eureka Springs, Arkansas. I used to go there as a kid with my parents, and I took my wife there for our honeymoon. It’s a great little mountain town full of artists and old hippies, galleries and bookshops and quirky restaurants. I don’t know how it survives there.

During our winter honeymoon, we walked the streets and explored the shops, and I couldn’t help wonder about the more sinister aspects of the place—the religious and political conflicts that surely seethed beneath the surface.

And that seething beneath the surface bit is what grew into a story, and it’s the reason I transplanted the setting.

The Appalachians are among the oldest mountains on earth, and may even have been connected to the mountains of Scotland in the primordial past. They’re associated with the people of Scotland now, being settled by Scot and Irish immigrants who came to the region searching for opportunity and something like home.

And yes, I have spent a lot of time there. The Appalachians are great for hiking and camping, and the mist that rises in the morning and settles in the evening gives the region an eeriness that can’t be explained, as if something really were sleeping beneath the hills.

It was vital to the tale that Ravencroft be evocative, chilling, a character in its own right. In that sense, I do not think I could have done the setting justice without having experienced both of the sources directly.

Philip Athans: Where can people go to find out more about you, your writing, and what’s coming up next for you?

Logan L. Masterson: My website, agonyzer.com, features a blog where I talk about my upcoming projects and events. I also have a Facebook author page for those who find that easier. There’s a page for Ravencroft Springs, too!

Philip Athans: Thanks Logan, we’ll be on the lookout for more!