THE CARE AND FEEDING OF REDSHIRTS

By now I’m sure everyone is familiar with the concept of the “redshirt”—these were the often un-named characters, played by guest actors you’d never seen before, who beamed down to an alien planet with Captain Kirk and were never seen or heard from again.

Well, that’s not entirely precise. Often we saw them die in some horrible way, or held our breaths while Doctor McCoy held his scanner over their bodies . . . is he? . . . is he? “He’s dead, Jim.”

There’s all sorts of different kinds of storytelling, and though I love Star Trek with the passion of a thousand suns, mid-60s low-budget TV storytelling isn’t necessarily the best model.

The weekly episodic TV series requires a certain economy of storytelling that a novel, for instance, never has to suffer over. Even a contemporary TV series, especially a series in which the story continues and develop over a season or more, doesn’t have to start at rest—the Enterprise is fine and so is the crew and they’re on their way to their next destination—then end at the same point, with lots of fun and adventure in between.

That’s going to leave you very little time to establish stuff like how the monster works, who the bad guy is, what happens when you’re put in the torture machine . . .

This is what the “redshirt” does, from a storytelling point of view. How do you know the monster kills you by draining you of salt? Crewman Darnell (who, for the record, wore a blue uniform) is found dead, depleted of salt. Sad for the Darnell family, but at least now Captain Kirk knows something about what he’s dealing with.

In the Star Trek episode “The Changeling,” the insane space probe Nomad manages to take out a total of four redshirts (tied with “The Apple” for “bloodiest” redshirt episode). In “The Changeling,” only one of the four security officers, Carlisle, was actually referred to by name. In this episode we need to know that Nomad is capable of killing, kills with a cold detachment, and we get to see precisely how it goes about this. The stakes are raised for Captain Kirk and his surviving crew. There’s real, not just threatened or suspected danger.

In “The Apple,” our man Hendorff is first to go. If not for his sacrifice, we’d never know that the seemingly pastoral world of Gamma Trianguli VI was filled with deadly flora. Now we know not to stop and smell the flowers. 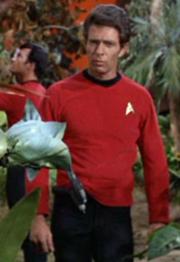 Walk away, man. Just walk away.

Lieutenant Kaplan is vaporized by lightning—at least he went quick. Security officer Mallory steps on an exploding rock. Marple is murdered by the primitive villagers.

Hey, nobody ever said it was going to be easy, being a Star Fleet security officer. They knew the risks! And look at all we know about this world now, not the least of which is that any step there could be your last—reason enough for the cast still under contract to want to get back to the Enterprise. And Marple’s death shines a whole new light on the otherwise peaceful-seeming natives.

Given more time, extra words, we might have gotten to know these four doomed souls better before they passed on, which would have made those tragic deaths all the more poignant and dramatic, but that still doesn’t lessen the storytelling necessity for their deaths.

We always need to be looking for ways to raise the stakes, increase the threat to our heroes, and the humble “redshirt” stands ready to fill that unenviable role. But that’s not the only role they can (or should) play. The limits the Star Trek writers suffered under meant their stories had to click right along, fast and furious, so we don’t always get time to understand who these poor saps are before they show us how the monster works. But are you writing a novel? You have that time!

What else do you need this character for—any character for? Comic relief? An agent to send on an errand? Could the “mentor” character die in some way that says, “Yikes, if the witch can set Merlin on fire, the rest of us are in trouble!” It’s not only perfectly okay for supporting characters to serve double duty, it can lend a certain finesse to the whole thing. If we like the funny guy who doesn’t take the whole thing too seriously, it hurts when he dies, and his absence then helps us maintain that sense of danger and desperation. This isn’t funny anymore. people I like are dying!

3 Responses to THE CARE AND FEEDING OF REDSHIRTS