BOOKS FOR FANTASY AUTHORS XV: WHY I WRITE

From time to time I’ll recommend—not review, mind you, but recommend, and yes, there is a difference—books that I think science fiction and fantasy authors should have on their shelves. Some may be new and still in print, some may be difficult to find, but all will be, at least in my humble opinion, essential texts for the SF/fantasy author, so worth looking for.

Why I Write, a slim volume published as part of Penguin’s Great Ideas series, collects four essays on writing by George Orwell, author of what I believe is the single most important novel of the 20th century: 1984.

The essays were written between 1931 and 1946 and despite Orwell’s pleas to the contrary, a version of Newspeak has managed to change the language, and contemporary readers and writers will need to keep this in mind, but the overwhelming majority of Orwell’s advice is still entirely valid. 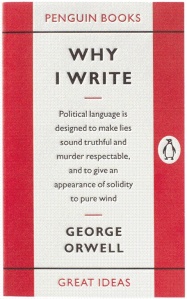 Though geared toward the political writer, and not the science fiction or fantasy author, Orwell as much as anyone recognized the power of science fiction (1984) and fantasy (Animal Farm) in the effort to convey a political message—or grind an axe, as the case may be.

You may not consider yourself a “political writer,” and for what it’s worth, neither do I, but for better or worse we are all “political” in one way or another and the tradition of political genre writing goes back to the very beginning and some of the genres’ greatest classics have overtly political points of view, like Frank Herbert’s Dune or Robert A. Heinlein’s Starship Troopers.

Whatever your political stripe, or the degree to which politics plays into the themes of your writing, these four essays are a must read for any serious author. For instance, I use the following extended passage from the essay “The Lion and the Unicorn” both in The Guide to Writing Fantasy and Science Fiction and in my worldbuilding classes as a great example of how the popular culture of a place and time can be concisely expressed, and the importance of what it means to be an ordinary person inhabiting this place and time. The challenge for my students is to find a way to present the popular culture of their created worlds as well as this: 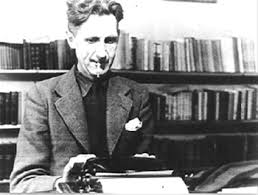 “But in all societies the common people must live to some extent against the existing order. The genuinely popular culture of England is something that goes on beneath the surface, unofficially and more or less frowned on by the authorities. One thing one notices if one looks directly at the common people, especially in the big towns, is that they are not puritanical. They are inveterate gamblers, drink as much beer as their wages will permit, are devoted to bawdy jokes, and use probably the foulest language in the world. They have to satisfy these tastes in the face of astonishing, hypocritical laws (licensing laws, lottery acts, etc., etc.) which are designed to interfere with everybody but in practice allow everything to happen. Also, the common people are without definite religious belief, and have been so for centuries.”

And he goes on to say:

“One can learn a good deal about the spirit of England from the comic coloured postcards that you see in the windows of cheap stationers’ shops. These things are a sort of diary upon which the English people have unconsciously recorded themselves. Their old-fashioned outlook, their graded snobberies, their mixture of bawdiness and hypocrisy, their extreme gentleness, their deeply moral attitude to life, are all mirrored there.”

The last of the four essays, “Politics and the English Language” takes on the subject of how to write more head-on, and I’d love for you to read what Orwell has to say rather than my paraphrasing, so I’ll leave you only with Orwell’s list of rules that he said “will cover most cases:”

i. Never use a metaphor, simile or other figure of speech which you are used to seeing in print.

ii. Never use a long word where a short one will do.

iii. If it is possible to cut a word out, always cut it out.

iv. Never use the passive voice where you can use the active.

v. Never use a foreign phrase, a scientific word or a jargon word if you can think of an everyday English equivalent.

vi. Break any of these rules sooner than say anything outright barbarous.

Got that? Good! Now get the book.

4 Responses to BOOKS FOR FANTASY AUTHORS XV: WHY I WRITE