Erin M. Evans graduated from Washington University in St. Louis with a degree in Anthropology. I first met her when she came in to interview for a position as an editor at Wizards of the Coast, and the second time I met her I hired her. She worked on a number of WotC novel lines including Eberron and Forgotten Realms, and left the company right after I did. And no, not because I did! Like me, she still lives in Seattle with her husband and son. I mean, we both live in Seattle, not that I live with her husband and son.

You know what I mean.

Erin M. Evans: When you take reality and add an external form of the internal—making myths, symbols and other bits of the unconscious real, too.

Evans: When you take reality and extrapolate, compellingly.

Athans: Your new Forgotten Realms novel, Brimstone Angels: Lesser Evils has hit the shelves this week. Tell us a little bit about it.

Evans: Brimstone Angels: Lesser Evils is the second book in my series following Farideh, a young tiefling who has a warlock pact with a half-devil, Lorcan. That sounds bad—and since tieflings are the descendants of humans and devils (and it shows) it doesn’t look good either—but Farideh keeps the powers to protect her loved ones.

In Lesser Evils, Farideh gets pulled into a mission for the Harpers, a secretive society dedicated to upholding the balance in the Forgotten Realms world. An artifact from ancient Netheril has surfaced and leads them to a lost library deep underground, where they discover not everyone is who they seem. 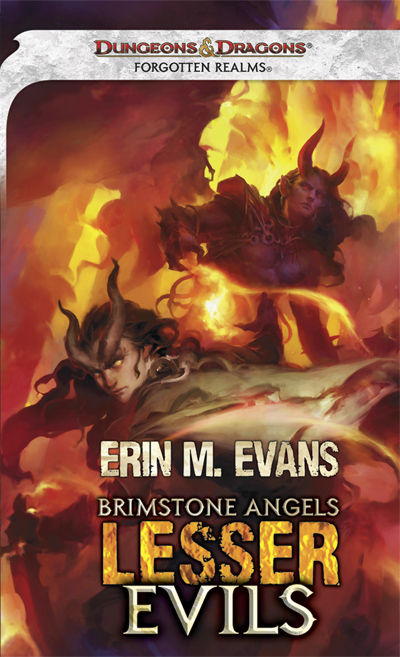 Athans: The name “Farideh” is familiar to me—she was your character in my own 4th edition Forgotten Realms campaign that I ran when we worked together at Wizards of the Coast—how is the Farideh of Brimstone Angels different from the Farideh I came to know and love around the gaming table?

Evans: You have a funny way of showing love—I seem to recall you almost killing her with a mind-controlled dire bear . . .

This is one of those things I feel like you’re not supposed to do—or at least not supposed to admit you do! But yes, Farideh grew out of the backstory I had for my tiefling warlock (and I kept the same name, so I can’t even deny it!). When I went to write the book, however, I pulled that backstory apart mercilessly. What’s fun at the table doesn’t always hold up on the page. For example, Game Farideh had a Fey Pact with a banshrae called Shemzu, who I don’t think ever showed up in the game. I liked the Fey Pact, but it doesn’t really add anything all that compelling to the character. And a master who’s just a nebulous force off on another plane isn’t very interesting either—I think Book Farideh’s very controlling half-devil patron is much better for the story.

In general, Book Farideh is a lot more conflicted. She’s younger, she’s still sorting out who she is in some ways. She’s a lot more moral—she doesn’t tend to take “don’t worry about it” well—and I think a great deal braver when the chips are down. I think she’s a lot more interesting to write about than snarky Game Farideh ever would have been, even if Book Farideh is probably worse at killing monsters that are ridiculously inappropriate for her level!

Athans: With a new edition of the Dungeons & Dragons game just around the corner, the Realms is changing again, without spoilers, how does the series that began with Brimstone Angels in general, and Lesser Evils in particular, fit into that next edition of the setting?

Evans: Both books are set in the current, Fourth Edition timeline, but Lesser Evils leads into my next book, The Adversary, which will feature Farideh and take place during the Sundering, an event that promises to bring the Era of Upheaval to a close with style. Throughout the Brimstone Angels series, Farideh has had a tendency to try and tackle problems which have been a bit out of her league. In The Adversary, that tendency catches up to her as she comes under the notice of Asmodeus, the king of the Hells and the god of evil, who stands to lose a great deal as the gods scramble for power.

Evans: The earliest fantasy novel I can remember reading was The Lion, the Witch, and the Wardrobe when I was seven—although I remember picking it up because it sounded like a cool fantasy story, so it probably wasn’t the first. That one . . . pretty much freaked me right out. Did not attempt the rest of the series until I was a lot older, and had blocked out Aslan’s whole death chapter.

My mother insisted I was going to be a writer for as long as I can remember, which meant of course I dug my heels in and insisted there was no way I was going to be a writer. So while I loved a lot of fantasy books—I loved Dianna Wynne Jones, Patricia C. Wrede, and Jane Yolen in particular—the one that spurred me to agree with my mother and start writing fantasy is actually a book I loathed so much I chucked it across the room and decided I could definitely do better than that. I don’t know that I’d ever not finished a book before that, but I literally sat down at the keyboard and started writing as soon as that one hit the ground.

Athans: Is there a particular source for ideas you find yourself going back to? Mythology, current events, history, your own life, etc.?

Evans: I have a degree in anthropology, which you would think would be totally useless outside of academia (I realized very late in the game that I really did not want to be an anthropologist), but when it comes to coming up with nifty details, it’s fabulous. In Lesser Evils there’s some linguistics trickery, an archaeologist, and a monster inspired by Buddhist self-mummification techniques from the early 1800s.

When it comes to characters, I try to find things from my own life that I can tap into, even though they’re seldom exact matches. I’ve never, for example, been ejected from a holy order—but I’ve been dumped, laid off, and made to eat lunch in the library. When you get down to it, the feeling’s not that dissimilar.

Athans: What comes first, the hero or the villain?

Evans: It’s best when they develop together and grow off each other. I like villainous characters who get to grow and change along with the protagonists—albeit not as successfully in most cases—so I’m a much happier writer when I can do that. But I have to admit, in Lesser Evils, one big villain was actually a last minute addition—I’d planned to just have this looming threat of the city of Shade, the last remnant of an ancient empire that’s bent on reclaiming its old power. But . . . even a floating shadow city isn’t as scary as a person. So I created Adolican Rhand to stand in for it in the second draft.

Athans: What is the most important element to a richly-realized character (back-story, goals, politics/morality/ethics, family/relationships)? Where should an author start?

Evans: If I had to pick one thing, I think it’s relationships. The way that we interact with other people reflects who we are, and when you show different people interacting differently, you cast more reflections and create a more dimensional character—complete with all those other elements. Who gets on their last nerve? Who do they love and how do they love them? What can’t they say to that person that they can say to someone else? How could that person hurt them unlike other people?

Athans: With this, your third novel, now on sale, what have you found to be the most surprising aspect of being a professional, published author—what were you least prepared for when you were still “aspiring”?

Evans: I don’t think I fully appreciated how much extroversion is necessary in being an author. It seems like for every minute you’re alone in a coffee shop, coming up with clever turns of phrase and solving plot issues and all that jazz, there’s another minute that you need to be talking about your book, soliciting reviews, introducing yourself to con committees, etc. As someone with a terribly stubborn anxiety disorder, I could do without that part. But it would end up meaning I can’t do the part I love.

And we all hope you keep writing—and know you will. Thanks!