As part of the process of writing The Guide to Writing Fantasy & Science Fiction, I interviewed a few key players in the SF/fantasy community. Their wisdom and generosity is liberally sprinkled throughout the book, but I couldn’t use every word—and wanted to do some follow-ups. What follows is an expanded interview with my friend and former coworker at Wizards of the Coast, video game writer and novelist Jess Lebow.

Starting off his video game writing career with a bang, Jess Lebow created the story for the original release of Guild Wars. Just before that he worked with me as an editor at Wizards of the Coast, where he also served double duty as an author, penning novels in the Forgotten Realms, Magic: The Gathering, and Dungeons & Dragons lines. Since then he’s worked on game titles like Pirates of the Burning Sea and League of Legends, and is currently at work on a new project for a Ubisoft studio in Shanghai, China.

Jess Lebow: A speculation on life where advancement of technology has not happened, and the rules of spirituality have collided and mixed with the laws of nature.

Lebow: A speculation on what could happen given unlimited time and resources to develop technology—and the ramifications that would have on us as people.

Lebow: The first? The Lion, The Which, and the Wardrobe. Everyone in my grade school was reading and talking about it. I was so caught up in the whole experience. I mean, I was not the most popular kid in school, but somehow this book allowed people to transcend the cliques and labels that are so prevalent at that age. I’ll never forget it.

Lebow: We had an assignment in second grade. I’m not sure the assignment was to write a short story, but I did. It was about a young boy who had an important test at school, but his tennis shoes came alive and ran away without him. It wasn’t until I was just about to graduate college that I was actually published, and then it was another couple of years before I got paid. I got $50 for an article in a print magazine. I used the money to buy a six pack of beer and a new board game.

Lebow: I try not to read reviews anymore. Just after my first book was released, I read all of them. I was very lucky in that the first dozen or so were good to excellent. Then I started on my second novel, and the next reviewer I read was not at all kind to me. In fact, he was so cruel, that I had a hard time getting back on the horse. I fell behind in my work on the new book, and it took me nearly two months to get back up to speed. Since then, I only read reviews if I’m not working on something important. Of course, after nearly a dozen years now, I’m not nearly as thin skinned, so I’m more likely to chuckle at some raving reviewer’s call to have me hanged than take it personally. And again, I’ve been lucky. For every bad review there are dozens of positive ones. I’ll take that ratio any day of the week.

Athans: Is there a particular source for ideas you find yourself going back to? Mythology, current events, history, your own life, etc.?

Lebow: History is a great place to start for basic conflicts. I figure, if someone has started a war over an incident, then a reader will believe a character who takes offense at the same thing. Often, though, I find myself jotting down little vignettes from daily life—things that seem absurd or amusing or just interesting in the way they played out. Sometimes I weave these together or into my work. Other times they just sit on the page, waiting for the right moment. I have every scrap of paper I’ve ever jotted on. None of the ideas are lost, but they certainly aren’t organized.

Athans: At what point do you start to think about length, starting with the decision between a short story and a novel, up to whether the book you’re working on is the first in a trilogy or ongoing series? Does it help to take a “big picture” approach early on, planning on sequels before the first book is even written?

Lebow: At the outline stage. It’s important to know where you are going before you begin. Even if you don’t end up writing the whole trilogy, it really helps develop the world if you know what happened before and after the book you’re writing.

Athans: What advice can you give an aspiring fantasy author on how to structure a plot.

Lebow: If there was only one piece of advice I could give it would be this: Remember Newton’s Third Law of Motion—for every action there is an equal and opposite reaction. In other words, for every move your protagonist takes, the antagonist driving the conflict in the scene (be that a character, an environment, or a circumstance) needs to make one too. The only time this stops is when the conflict is fully resolved.

Athans: What comes first, the hero or the villain?

Lebow: Neither. The conflict comes first. The hero and villain are conceived out of the push and pull that will drive the story forward. After that, when I know the sides and what must be resolved in order to complete the book, then generally I define the hero before the villain. Though, neither is fully complete until about half to two thirds of the way through the book. The day I sit down to write, and the action moves inside my head so quickly that I can barely type out a description fast enough, that’s when I know they have taken on a life of their own. That’s when they start making decisions for themselves instead of me making them in their stead.

Athans: If you could give an aspiring fantasy author one piece of advice on the subject of world-building, what would that be?

Lebow: Again, start with your conflict first. Define what drives the core of the story. Settle on the motivating factor that permeates all the actions of every character in your story. It could be a political conflict, say a war between two realms over valuable territory. Or it could be personal. Perhaps your story is about the struggles of a boy king who’s uncle is trying to kill him to take the throne. Whatever it is, this conflict will define the scope of your story. If it’s a story about an epic war, then perhaps you need a lot of characters and a long timeline. If it’s a personal story, then perhaps you have a smaller cast, each of whom you spend much more time with.

I like to think about creating a world like building a brick wall. Your conflict is the first brick. From there, you add mortar and another brick. Then more mortar, and a third brick. And so on. It takes time, and the placement of that first brick is really important. If it’s cockeyed, your whole wall could eventually come falling down.

Athans: Do you take detailed notes before and/or during your writing? When does the bulk of your “world-building” take place, before you begin writing, or does the world take shape as you go?

Lebow: I take notes at each phase. The structure of my world building takes place before I start writing. It evolves further during the outline and even more during the actual writing. While I’m working my way through the first draft I take notes on a hard copy of the outline. That way, I can go back through it and make sure I’ve covered everything. Especially if I’m on a roll, and I don’t want to stop to add some important details to an earlier scene, I’ll just drop a note on the outline and pick it up later.

Athans: What is the most important thing to keep in mind when creating a fantasy hero?

Lebow: Character growth. If the hero doesn’t best some inner demon or overcome some obstacles over the course of the story, then he or she is going to feel flat and stale.

Athans: What is the most important thing to keep in mind to creating a fantasy villain?

Lebow: Giving a villain at least one redeeming quality can add a lot of depth to the story. If he’s not just a mustache-twirling, cape-wearing hooligan who runs around trying to tie women to the train tracks, and if the reader can relate to him, even on a small level, then you have more tools with which to create an emotional experience. 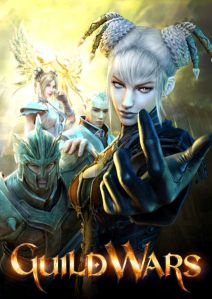 Guild Wars, Game of the Year

Athans: Are there freelance opportunities for creative writers in the video gaming industry? Do the game studios look for published authors to create their game worlds?

Lebow: There are some freelance opportunities for creative writers in the video game industry, though most companies want to have a team of writers on staff, especially if they are making an online game. Being published is a definite advantage, though there are plenty of writers in the industry who have written video games exclusively.

It’s still somewhat of a struggle, to be honest. Some game studios understand the value of good writing. Others not as much. They know that they need text and dialogue, but often they don’t fully understand the value of a well-told story. The good news is that this is changing, and that the fans are demanding that their games also have good stories.

But the last year has been tough for the video game industry. We’ve seen a lot of big companies cut back, and in many cases lay off a lot of people. As a result, I think the opportunities for writers (and really everyone in the industry) have been harder to come by. I still believe writers are making advancements, and have seen some really well-written games in that time, and I think that trend will continue. Once the market picks back up, I firmly believe the opportunities for writers, both freelance and on staff, will grow.

Athans: In 100 words or less, describe the writer’s role in creating a video game.

Lebow: Initially the writer is responsible for the building of the world and the creation of a narrative outline. As the process continues, he or she will work with other departments to make sure the characters, environments, and design mechanics mesh with the story being told. As the game takes shape, the responsibility shifts to the generation and editing of text.

Athans: Give me some general words of encouragement for the aspiring fantasy author.

Lebow: Never give up. Never surrender. Wait, is that from a song?

Athans: If it’s possible that anyone reading this hasn’t yet read any of your work, where should they start? I know that could be like asking which of your children you like best, but assume they’ll read and love them all eventually, and get them started!

Lebow: Start with either Master of Chains or Obsidian Ridge. Both are great books, and though one is not a strict sequel to the other, they are both set in a similar location.

If you need a quick break from fantasy, check out my latest book, The Beer Devotional. It’s a departure for me (a non-fiction book about beer), but it’s on a subject that is near and dear to my heart.