WANTED: ONE DEADLINE, ANY CONDITION

By now everybody knows that since June I’ve had a little extra time on my hands. Lots of people have been asking me how I’ve been filling it, and I’ve largely been telling the truth. I did slack a bit the first month and a half or so, giving myself permission to take some much-needed time off. And I have been writing, but not as much as I would have hoped.

When I first found myself sans “day job,” I thought, Wow, with this kind of time on my hands I should dust off that urban fantasy idea I’ve been kicking around for years and write the dang thing up. Working on it close to full time, I should be able to knock that baby out in a month or so, but still I gave myself a more conservative deadline of September 1st.

Well, that September 1st deadline passed just a smidge over a month ago and I’m somewhere between a third and a half done with that book. 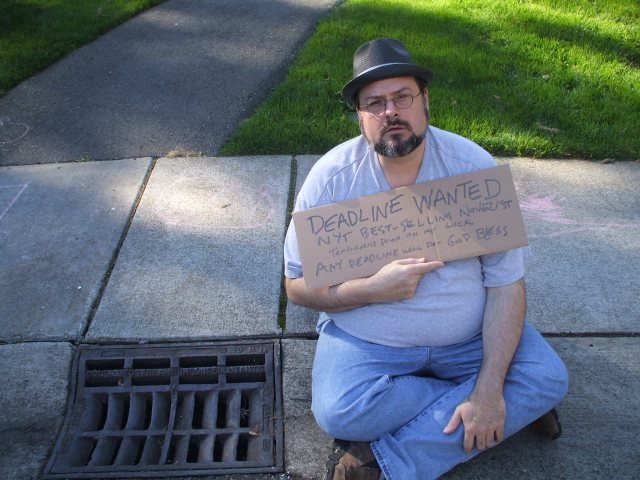 Giving myself a little slack, two months isn’t really long enough to write a novel—even working “full time.” Realistically you can’t just sit down at 9:00, be brilliantly creative until noon, take half an hour for lunch, then start being brilliantly creative again until 5:00, so there really is no such thing as “writing full time.” Maybe there’s an author out there somewhere who does just that—and kudos to him or her—but that’s not me. I need to have at least a little inspiration to get going, and I like to at least partially stick to my own advice to enable myself to write anywhere, at any time, under virtually any conditions.

The danger of following that advice, of course, is that it’s very easy to translate it to: “I’ll write somewhere else, a little bit later, under virtually any future conditions.” That’s a long way of saying “procrastinate.”

When I was a full time editor I often told people that I could do anything as long as I had a deadline. Unfortunately for me, too many people took me up on that too often and I ended up working a lot harder than I should have. But I hit those deadlines, damn it, and every single one of them, and some of them were obscenely unrealistic.

So of course now that my time is largely my own, I should be a writing machine. I should be deep into my second post-Wizards of the Coast novel by now, well into the third screenplay, and I should have as many as half a dozen new short stories in circulation.

Time for honesty: I have none of those things.

In fairness to myself, I have been writing a monthly column for Grasping for the Wind, a job I’m not being paid for but that I take as seriously as any paying gig, and though the last one was kind of a close call, I haven’t blown that deadline yet. And here I am at Starbucks at 1:22 in the afternoon on Tuesday the 5th of October, furiously pouring out my soul into this week’s Fantasy Author’s Handbook blog post. This one might be a few hours later getting posted than usual, but I have been religious about posting every Tuesday, and today will be no exception.

I’m also keeping friendships and professional acquaintances alive, at least via email. I’ve been keeping up with Twitter. I’ve been researching a book on creative intellectual property development, exploring options in consulting, and full-on job hunting, too. I’ve been shockingly busy, but no busier than I was when I wrote all of the books I’ve had published so far—eleven in all—while still holding down a more-than-full-time post at Wizards of the Coast. There’s no reason for me not writing everyday.

Except that no one is waiting for it.

September 1st came and went and no one called me looking for the manuscript. No one threatened to kill the book and demand the advance back. There’s no advance to demand back—I’ve determined not to send this book to anyone until it’s done, at least in first draft form. The only deadline comes from me.

And here I am, puzzling over how I can post a new article here every Tuesday, a new chapter of Completely Broken every Friday, and a new column for Grasping for the Wind on the 19th of every month, but I can’t make myself finish a novel by a certain date.

But with those other three things I’ve made a public promise to people—even if it’s not lots and lots of people—that I would post here every Tuesday, and there every Friday, and the other place every month, and I never did make a public declaration that I would be done with this urban fantasy novel by September 1st.

No one pays me for this blog, Completely Broken, or Grasping for the Wind, but I hit those deadlines because I don’t want to appear to be breaking a promise—indeed I don’t want to break a promise.

This morning, following a link from someone I follow on Twitter, I finally checked out the National Novel Writing Month web site and knowing already that I wanted today’s post to be about my lack of a deadline, I signed up. I’ve now made a promise to write a 50,000+ word novel from beginning to end in the month of November. And I won’t cheat—finishing the partly-done urban fantasy doesn’t count. I have another idea I’ve been kicking around even longer that I think will really lend itself to that kind of super fast writing.

And that also gives me another deadline. In order to start on the NaNoWriMo book I need to finish the urban fantasy by November 1st. That gives me less than a month. Being this far in already, I can do that.

And having made that promise, you, followers of Fantasy Author’s Handbook, can hold me to that deadline. Now that I’ve publicly made that promise I have to keep it, and by December 1st, I’ll have two novels in the can.

8 Responses to WANTED: ONE DEADLINE, ANY CONDITION