If you’re like me, you woke up this morning and thought, I think it’s time for the world to finally see Dizes Dager.

But I alone have the power to make that happen.

A couple weeks ago I finally cleaned my garage, and in a box of my kids’ school papers my wife ran across a stack of my old books. Not dusty copies of Baldur’s Gate, mind you, but really old “books,” written when I was just a wee lad and somehow not included in the package that was given to one of my teachers, who lost them. There were a few, some from as late in life as seventh grade.

I’m not sure now if this was meant to be a comic book or something like the storyboard for a movie. I’m clearly credited as an animator, and characters from the cartoon Johnny Quest are also credited as actors, so . . . whatever that means.

I think what I like most about it, other than the obvious (it’s startling full-color art!), is that I have no idea what Dizes Dager means. What is a Dizes? Is Dager just Danger misspelled? Are the Dizes dangerous, or are they in danger?

Now, for the first time in maybe thirty-five years, you have a chance to help me figure it out. 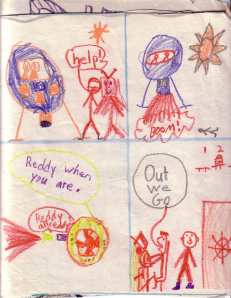 I hope you were reddy for how cool that was! 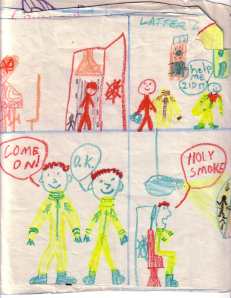 Holy smoke, I guess it isn’t latter after all! 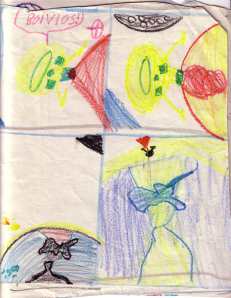